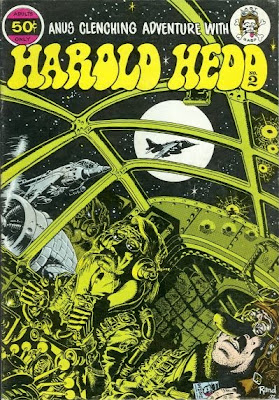 I was recently presented with a nice stack of cast-off underground comix by my younger brother, who is a quiet connoisseur of such things. One title immediately grabbed my attention, Harold Hedd, by the late Rand Holmes. Holmes apparently taught himself to draw as a teenager by copying stories drawn by Wally Wood (Mad & E.C. comics) and Will Eisner (The Spirit). That influence served Homes well, because while his artistic skills sharpened over the years, even his early stuff is nice to look at. Rand Holmes' first cartoons were originally published in Harvey Kurtzman's Help Magazine. In 1969 Holmes started working for the Georgia Straight, a weekly underground tabloid based in Vancouver. There, he began to develop the adventures of Harold Hedd, one of the underground world's most popular characters. A collection of Hedd stories were published in an over-sized comic in 1972, with a second volume released in 1973.
In addition to various 'Harold Hedd' comics, Holmes' work appeared in other underground comix like White Lunch, Slow Death, Snarf and Fog City. During the 1980's, Holmes staged a comeback with the two-part comic 'Hitler's Cocaine' and other stories for Death Rattle and Snarf (for Kitchen Sink Press), Alien Worlds and Twisted Tales (for Pacific Comics). He eventually left Vancouver, and devoted his creative energy into painting oils until his death in 2002.
My brother has been putting together a large assortment of high grade undergrounds over the last few years, and it constantly amazes me that this type of truly small press material, which often was issued in limited print runs by admittedly avante garde, antidisestablishmentarian, counter-culture individuals, doesn't fetch the premium pricing that the latest "gimmicked-up, alternate-covered, piece of mundane dreck does - once the CGC gets its grubby mitts on it.
Granted this type of comic will offend lots of people, but books like this were created as labors of love by some extremely creative folks. Undergrounds - back in the day - were the very essence of "indie", but perhaps due to their sexually explicit nature and their routine portrayal of drugs, and/or violence they've simply had their day in the sun, and perhaps ultimately become little more than Tijuana Bible knock-offs in most fanboys minds.
That's too bad, but if you are of a mind to see what lies just under the carpet, you could do worse than seek out a few underground comix like Harold Hedd (Harold Hedd #2; Sept. 1973, pictured above; left). Guaranteed to laugh your ass off, ain't a bad way to spend an afternoon!
Posted by Chuck Wells at 1:27 PM

As you probably remember, there was a time when underground comix and fumetti were treated by various critics and histories of the comic book as if they were its Future. It didn't seem plausible to me at the time, but neither would I have predicted that the publication of underground comix would utterly implode before some of those books on their triumph would go out of print.

I would allow that much of what passes for "indie" or small press publications these days are at least the equivalent of spiritual descendents of the underground comix from days gone by.

However, I always hated fumetti-style stuff and don't miss that kind of crap at all.

I've ordered "The Artist Himself" by Patrick Rosenkranz from Amazon. It's advertised as a Rand Holmes retrospective. The publishing date has been pushed forward a couple of times, so I don't know when it will appear. Amazon says, "We'll notify you when we have an estimated delivery date for this item." Amazon price is $19.13

My book The Artist Himself, A Rand Holmes Retrospective is now scheduled to come out Spring 2010 but I'm not holding my breath. Fantagraphics has had the manuscript for two years now. This retrospective / biography covers all of Rand's adventures, from the Bay of Fundy to Lasqueti Island and includes a shitload of his art. His family gave me complete access to his artwork, journals, sketchbooks and photo albums. Even if you're already a Rand Holmes fan, you will find things you've never seen before in this book and learn a lot about this secretive artist.