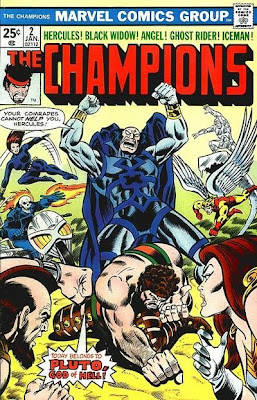 Today we take a leap back to January 1976 for the 2nd issue of Marvel Comics title, The Champions. That series featured former Avengers, Hercules & The Black Widow, along with two original X-Men, The Angel & Iceman, plus supernatural hero, The Ghost Rider as a start-up team of superheroes. [Here's a bit of trivia for you: creator Tony Isabella originally pitched this idea as a trio comprised of Angel, Iceman and new hero, Black Goliath, but the editorial powers nixed that idea.]
Isabella wrote "Whom The Gods Would Join..", and the artwork was by established penciller Don Heck, with John Tartaglione's inks. Hercules and his new companions (along with the goddess, Venus) have just defeated some weird creatures from beyond time, when they are suddenly confronted by Olympian gods Ares, Pluto and Hippolyta, Queen of the Amazons. This trio demands that Hercules wed Hippolyta and that Venus likewise weds Ares. Hercules balks at this suggestion and begins to pound the pompous Ares into the ground, only to have his strength fade at Pluto's touch. Before his friends can leap to his aide, the Black Widow outlines a plan to save him. While Angel, Iceman and Ghost Rider distract Pluto, the Widow and Venus drag Herc to safety. Thus stymied, the gods transport themselves to Olympus, where Zeus immediately tells them where to get off, but crafty Pluto reminds the lord of Olympus that their tenuous treaty mandates both Herc's and Venus submission. Zeus grudgingly capitulates and the Huntsman is dispatched to secure the pair. He was last seen in Sub-Mariner #29.
Now the Huntsman isn't particularly impressive physically, he is a bit on the skinny side, but he does wield a fraction of Zeus own matchless energy, which is now combined with the flaming weapons of Pluto and brought to bear on the gathered Champions members. A single bolt of eldritch fire knocks Hercules and Venus into paralytic unconsciousness, and that leaves Angel, Iceman, Black Widow and Ghost Rider to tackle the Huntsman, but wait; it seems that this guy has some powerful back-up in the towering form of Menoetius, a Titan of Myth whose flesh has been transformed into living energy. I hate it when that happens!
After a neat sequence details the Champions efforts to prevail against this dire duo, the Widow manages to snare the Huntsman, Menoetius and a nearby utility pole in her web line which handily conducts all of the melting ice that's conveniently present due to Bobby "Iceman" Drake, and the two villains are temporarily zapped.
Unfortunately, while this has played out Pluto, Ares and Hippolyta have returned and gotten the drop on Ghost Rider, who was tasked with guarding Herc and Venus. Ghost Rider swiftly blasts the trio with his powers, but then discovers that he was tricked into striking against his teammates, who only appeared to be the evil gods - this was a ruse of the Huntsman. Now poor Hercules and Venus have been captured for real, and as the issue ends, the remaining Champions are left despondent over how they can get their asses to Olympus to prevent the unwilling betrothal of the friends. Next issue concludes the story with, "The Assault on Olympus!"
Isabella, Heck and Tartaglione certainly don't disappoint with this classic issue, and its always nice to look back at a time when comic book creators actually understood how to craft a story that has a beginning, middle and end, within a single issue and as part of a continued adventure in a monthly (or in this case, bi-monthly) format.
Folks the back issue bins are full of gems like this. Why waste your money on the same-old, same-old, marketing gimmick crossover crap. Seek this book out and read it for yourselves. Recommended!
Posted by Chuck Wells at 12:54 PM