From the Dust Bin: Ribit! 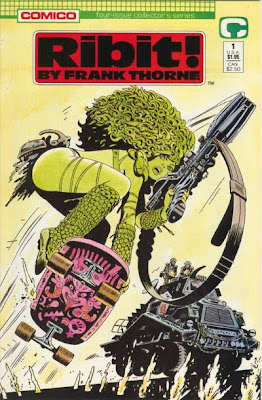 Ribit! was a four-issue 1989 mini-series created, written, and illustrated by comics legend Frank Thorne for defunct comic book publisher Comico. Ribit was actually a lizard who was created by a female sorcerer named Sahtee, as a pet for Thong (who was Sahtee’s aide). Thong was a good-natured fat man who constantly wished for a woman to love. Sahtee later became engaged in battle with an evil army to win back control over her kingdom. One night, Sahtee prepared a magical brew that was intended to create a warrior-woman. Sahtee believed that a female warrior would prove less conspicuous to her enemies and could therefore easily infiltrate the opposing force’s base camp. Moments before the ceremony, Ribit jumped into the brew and then emerged as a green warrior who loved Thong. And as it turned out, Ribit did prove to be more than a match for her enemies. You can easily find these four issues for cheap, and if you are a fan of Frank Thorne's work on Red Sonja, Ghita of Alizarr or Lann, then these issues will also entertain you.
Posted by Chuck Wells at 12:16 PM