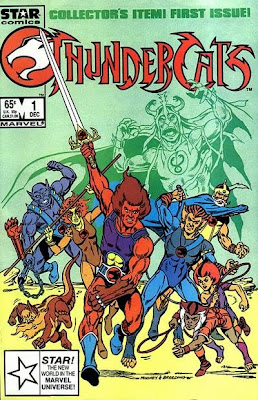 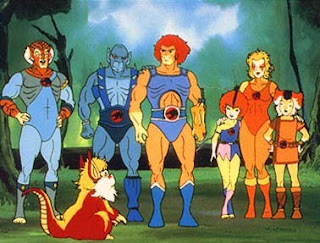 ThunderCats was a Rankin/Bass Productions animated television show which debuted in 1985, based on characters created by Tobin "Ted" Wolf. ThunderCats followed the adventures of a team of cat-like humanoid aliens from the planet of Thundera, who fled their homeworld after its destruction. En route to the world of "Third Earth", their fleet was attacked by the Mutants of Plun-Darr, who destroyed all of the starships with the exception of the flagship, hoping to capture the legendary mystic Sword of Omens they believed was on board. The sword holds the Eye of Thundera, embedded in its hilt, which is the source of the ThunderCats's power. Although the Mutants damaged the flagship, the power of the Eye drove them away and Lion-O's elderly guardian, Jaga, volunteered to pilot the ship to safety on "Third Earth". Because the journey to Third Earth took several decades due to the damage that the flagship sustained, Jaga died en route. Besides young lord Lion-O, other ThunderCats onboard included Cheetara, Panthro, Tygra, WilyKit, WilyKat, and Snarf.

When they awakened from their suspended animation on Third Earth, Lion-O discovered that his suspension capsule had only slowed his aging, and he was now a child in the body of a man. The ThunderCats and friendly natives on Third Earth constructed their new home and headquarters, "The Cat's Lair". Before long, the Mutants of Plun-Darr tracked them to Third Earth, where they joined forces with the demonic, mummified sorcerer, Mumm-Ra; who soon desired the Eye of Thundera in order to continue to hold sway over Third Earth.
Beginning in December 1985, Marvel Comics adapted the series for their short-lived, but popular Star Comics imprint. ThunderCats was initially written by David Michelinie and illustrated by Jim Mooney & Brett Breeding. A stellar lineup of additional artistic talent contributed to the series first several issues including Butch Guice, Joe Sinnott, Jose Delbo and Ernie Colon. The title lasted for 24 issues.
Posted by Chuck Wells at 8:51 AM

I don't think I ever saw the comic version, but I used to watch this cartoon whenever I could...I was an adult...creepy...
I'd still watch it, it was pretty fun! Snarf!
Oh yeah, that Snarf was annoying!
And you knew Cheetarah was never lonely, being the only gal in the 'pride'!

Chuck: Star Comics from Marvel was a very, very noble effort to give kids' comics a format. They did some truly great stuff like Planet Terry, Wally the Wizard and Thundercats. They had some many greats of kids’ comics working for them. Some you mention. Also Warren Kremer, Howie Post, Bob Bolling - just great stuff.

Thanks for mentioning this great attempt at publishing comics aimed at kids. - Mykal