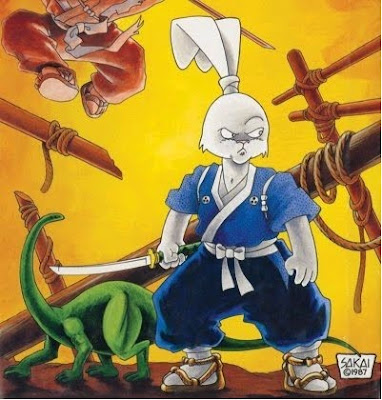 The anthropomorphic series Usagi Yojimbo is set primarily at the beginning of the Edo period of Japan (early 17th century), created by Stan Sakai in 1983, the book features a rabbit ronin, Miyamoto Usagi, who is partially based on the famous swordsman Miyamoto Musashi. Usagi wanders the land on a warrior's pilgrimage occasionally selling his services as a bodyguard.
The characters in the series were originally going to be portrayed as human in stories explicitly modeled after the life of Miyamoto Musashi. However while idly doodling, Sakai drew rabbit ears tied in a topknot on his proposed hero and was thus inspired by the distinctive image that this gave him. Sakai quickly expanded on his idea and created a fantasy setting that he decided suited his dramatic needs better, plus with a unique look that could potentially attract new readers.
After Usagi's 1983 appearance in Albedo, and later Critters, he began appearing in his own series in 1987. The Usagi Yojimbo series has been published by three different companies: Fantagraphics, Mirage and Dark Horse.
For his efforts, Stan Sakai has received the Comics Buyer's Guide Fan Award for Favorite Story for 1999. The trade paperback collection of this story also earned the Comics Buyer's Guide Fan Award for Favorite Reprint Graphic Album for 2000. Usagi Yojimbo has won several Ursa Major Awards, the major awards of the furry fandom genre and a Parents' Choice Award in 1990 for its educational value in accurately incorporating historical elements.
Posted by Chuck Wells at 3:46 PM

Stan Sakai has been writing, drawing, and lettering Usagi Yojimbo stories for over 185 self-titled issues and 25 years, and the 24th trade paperback collection is scheduled to be released from Dark Horse later this summer.

Stan is also super nice. I'm glad to have had an opportunity to meet him in person.