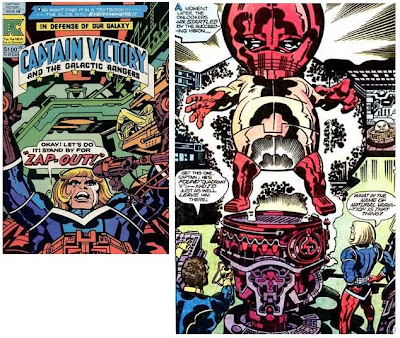 Created, written and drawn by Jack Kirby for Pacific Comics, Captain Victory and the Galactic Rangers didn’t make a major impact on the marketplace, but it did help pioneer major changes in creator’s rights within the comic book industry. Kirby’s frustrations over standard industry practices related to work for hire had left him with far less compensation and credit for works that he had produced for both DC and Marvel over the years, but Pacific offered Kirby something more like the book publishing industry, which generally allowed authors to retain ownership of their work while contracting for publishing and a share of ancillary rights. Kirby took the deal, and dusted off Captain Victory which he had originally developed in the 1970’s for a line of his own comics.
Captain Victory was an inter-stellar lawman who headed up a crew known as The Galactic Rangers. They were first seen chasing the villainous Insectons, and they soon caught their queen, Lightning Lady on Earth. But Captain Victory himself was killed early on and then replaced from a closet full of his clones. Beginning in 1981, Captain Victory confronted a bizarre assortment of Galaxy-spanning menaces for 13 bi-monthly issues and one special through January, 1984.

In a neat twist for fans of the King, during the latter part of its run, Captain Victory's back-story was dealt with. It was strongly implied that his father was Orion of The New Gods which would make the villain Darkseid his grandfather (called "Blackmass" here). It was never stated outright, but a number of clues were planted, including equipment said to belong to Captain Victory's father that was identical to the astro-harness ridden by Orion in the earlier New Gods series. Because The New Gods was owned by publisher, DC Comics, Orion was not specifically named and Captain Victory's grandfather, Blackmaas, was shown only in shadow, but that shadow actually bore a resemblance to Orion's father, Darkseid.
Posted by Chuck Wells at 2:29 PM