How NOT to treat a comic book collection! 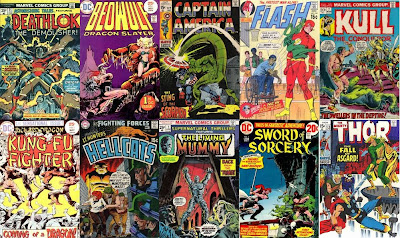 Well, the report is in, and it arrives with a degree of melancholy attached. The unwanted comic book collection that my friend retrieved from a neighboring widow lady, was both interesting and terribly sad to sort through. My buddy purchased bags and boards and then passed the entire lot over to yours truly to archive.
Last night I bagged around 100 of the comics and it featured books running from the 1960's through the early 1980's. It is highly likely that the woman lost her husband longer ago than I had initially thought, and only after having finally accepted his passing has she begun to start reorganizing her life, by discarding things of his that she didn't want or need, ergo these comic books. As for the larger batch that she donated to Goodwill, who knows what they would have looked like, but it is maddening to ponder considering what was remaindered at her house.
Of those that were salvaged over the weekend, there were runs of all titles that I've pictured above, including the issues pictured, plus single issues from the same era like Arion, Daredevil, Green Lantern, Nova, Ms. Marvel and The Defenders. There was virtually a complete run of Richard Dragon Kung-Fu Fighter, only two issues were missing. There were almost thirty issues of Thor spanning the Kirby & Buscema days, but with issues by Neal Adams, Walt Simonson and Ron Frenz peppered in. There were perhaps twenty issues of the Gold Key series, Space Family Robinson (based on the TV show Lost in Space) and there was a huge stack of mixed Charlton War titles, plus maybe a dozen issues of Marvel's The 'Nam.
Apparently through the grapevine, there is an indication that what was dropped off by the widow at the local Goodwill store is still there, so my pal is going by today to see if he can purchase any (or all) of those. Time will tell!
As for the melancholy, it is unfortunate that the lady didn't appreciate what her spouse had amassed. Based on this group of books, around 160+ issues, I doubt that there were any grail books present or high dollar stakes involved, but regardless of how you may feel about the books that comprised the late gentleman's collection; it is sad that she didn't take better care of them. After his passing, the comics were kept inside large open-zippered freezer bags in stacks of perhaps twenty issues or so, and then in groups of two bags, they were tied inside plastic grocery bags. Four of those tied-up grocery bags, which were pretty stuffed, were stacked inside a standard open-top cardboard box and then the entire lot sat on her covered porch - outside - for many long months. Think about the atmospheric pressure, temperature changes and humidity that they experienced, and then add in dust and dirt, which still easily managed to seep in. There was no obvious water damage, but opening them was akin to cracking the door to an outdoor storage shed. The smell wasn't overpowering, more of a tinge really, but the mustiness was there.
Of course I am no expert, but in my opinion, the treatment that they received probably reduced their overall condition individually by a full grade or more. Exposure to the elements has certainly expedited the tanning of the pages, and added foxing that wouldn't have been there otherwise. Also, the method of storage and how they were handled piled on unfortunate collateral damage. The many Astonishing Tales issues were among the most beautiful of the books, and they were somewhat crammed into the box in a way that left all of them and a few others with a permanent curl on the upper right of the front covers. Barring that having been done, they would have graded FN+/NM. There was a single issue of Jack Kirby's Mister Miracle [#18] that was the most physically intact, with white pages and a clean cover; I would call that one a NM-.
All in all, these books will be some nice reading material, but if my pal had moved a bit faster on these, he may have been able to recoup some financial rewards beyond the simple joy of recovering these lost treasures.
Posted by Chuck Wells at 8:29 AM