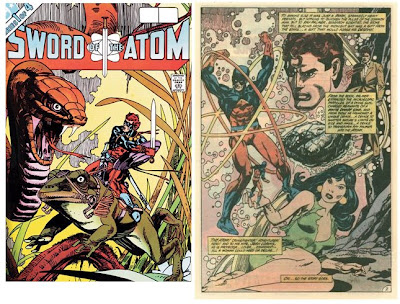 One of the great silver age superstars received a temporary status boost when DC Comics published a four-issue limited series entitled Sword of the Atom, beginning in Sept. 1983, Ray Palmer (aka The Atom) abandoned civilization after uncovering his wife's infidelity. Ray decided to charter a Central American flight to go in search of a missing piece of white dwarf matter (the same substance that gave him his size-changing abilities). Unfortunately his pilot was a shady drug smuggler, who conked Ray over the head and tried to toss him out of the plane before they inadvertently flew over the gangs cocaine fields. Ray recovered just in time to change into his Atom guise and he quickly made short work of the villains, but in the battle he was blown out of the plane and fell to earth, where he found that he was trapped at his six inch size. The Atom then becomes a Conan-like figure and hero to a tribe of six-inch tall yellow-skinned humanoid aliens who already dwell in the jungle.
Eventually three subsequent Sword of the Atom specials were released, which revealed that the colony was destroyed, despite Palmer's various attempts to stop it, by a group associated with the US Government who were acting as loggers. Ray Palmer was forced to escape via his signature trick of "phoning" himself home through the telephone lines to North America.
Writer Jan Strnad and artist Gil Kane pulled out all of the stops on this terrific series, and had they been issues of an ongoing Atom series it would have been even sweeter. In my opinion, these issues were so well done and so much in tone with the Atom's classic 1960's scifi-esque original series, that it may have lasted longer. Various later series have tried to reinvigorate the "Tiny Titan", but so far nothing has equaled this classic 1980's romp.
Posted by Chuck Wells at 8:41 PM

the atom is awesome!! i need to read 'sword of the atom' now.

you'll forgive my shameless self-plugging, I hope, fella, but if anyone reading your post finds they want to give Sword of the Atom a whirl, they can find the first two parts over here. . .

Joe, you go right ahead and plug away. Nobody in the Catacombs minds shameless self-plugging, particularly when it leads to nice comics goodness.