Comic Books Around The World: France 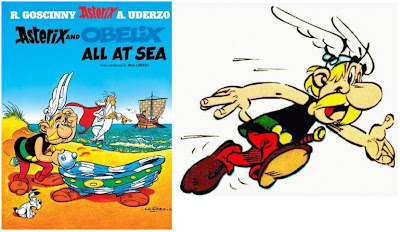 I haven't posted anything else in this series since January and that is too long. To be honest, I could probably spend at least a week on famous French comic books, so expect to see more French stuff at some point down the line. For today, lets take a look at one of the longest running all ages strips since the early days of the silver age .... even if it does originate outside the continental U.S.
The Adventures of Asterix is a French comic book & comic strip series published between 1959 and 2005. Originally created by writer Rene Goscinny and illustrated by Albert Uderzo, The series follows the exploits of a village of ancient Gauls as they resist Roman occupation. They do so by means of a magic potion, brewed by their druid, which gives the recipient superhuman strength. The protagonist and titular character, Asterix, along with his friend Obelix have various adventures. In many cases, this leads them to travel to various countries around the world, though other books are set in and around their village.
The Asterix series is one of the most popular Franco-Belgian comics in the world, with the series being translated into over 100 languages, and it is very popular in most European countries. Asterix is less well known in America and Japan.
The success of the series has led to the adaptation of several of the books into eleven films (eight animated & three live action). Noted French actor Gérard Depardieu played Obelix in one of these films. There have also been toys, games and food items based on the characters, and a theme park near Paris is built around the series premise and characters.
Albert Uderzo took over the job of writing the series after the death of Rene Goscinny in 1977. While the bulk of the series consists of humorous adventures in a historical setting, more recent volumes have employed science-fiction and fantasy elements like extraterrestrials in Asterix and the Falling Sky and the city of Atlantis in Asterix and Obelix All at Sea.
You can occasionally find Asterix volumes at Barnes & Noble for about $10 and they are well worth the price!
Posted by Chuck Wells at 1:34 PM

Hi !
Nice article ! Actually, Gérard Depardieu played Obélix in the three movies. Most french people would tell you only the second one is watchable.
As for the comics, it's really not what it used to be anymore; since Goscinny's death; MUCH less funny and entertaining...
Surprisingly, it's not in France but in Germany that Asterix sells the most today ; I know for a fact that the initial print-run of a new album there is 3 Million, pretty huge huh!

Thanks for talking about french stuff, and thanks for the cool blog !!

Discovered ASTERIX in Spanish class in high school. The US version of the strip was syndicated briefly in newspapers in the early eighties. Wonderful stuff with characters one comes to expect and look forward to over and over. Loved the last ASTERIX film even though I don't speak or understand a word of French!