What NOT to pass up at a yard sale! 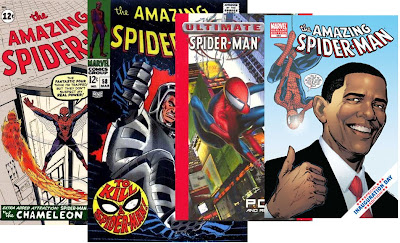 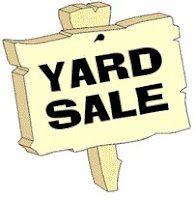 Two stories of note from this weekend that serve as nice moral lessons for budding comic book collectors:

First, a lady friend of mine who is an artiste [an artistic or creative person] visited a yard sale on Saturday, where she happened upon a set of binders,each containing multiple Spider-Man issues. Now she isn't really up to speed on what is collectible or not; but knowing that yours truly is a comic book fan, she gave them the once over, and still ultimately passed on making the purchase. Now, she had no idea what vintage the books were, no idea what value would had been assigned to them or whether they were worth reading or not.
However, adding insult to injury, she just had to mention all of this to me as she came in to work today, with a query on how I felt about the "soundness" of her decision not to buy these books as a gift for me. (?)
While I didn't actually mean it mean-spirited (and really only hurled it in good humor), I called her an idiot. Then she told me that the guy only wanted three bucks apiece for each binder. Someone felt enough concern over these comics to treat them with kid gloves, storing them in a protective binder and all, and individually sealed to boot.
So, she tells me all of this and I had no other choice, but to strip the good humor out of my tongue-in-cheek comment and send her on her merry way.
Idiot! [lol; sniff!]
Second tale, an employee of mine who also happens to be a comic book collector mentioned on Friday that a close friend (an older lady & widower) had offered him and his wife her late husbands beloved comic book collection. Now, please understand that the gentleman has passed away after amassing what potentially could have been a large assortment of comics and these would definitely have included stuff from several decades past. All my buddy had to do was go by and "collect" them.
Her offer was originally extended to my "buddy" way back in December 2008 and the lady has apparently reiterated this offer several times in the ensuing months. Well, just last week she finally told my doltish employee that she had taken a portion of these potential gems and donated them to the local Goodwill store and unless they came and picked up the remainder, they were going to be donated as well.
Pay attention kiddies!
I was forced to threaten the poor chap with loss of gainful employment, IF he didn't do as requested and relieve the poor woman of this unfortunate burden. I may have been joking about that threat, but I'm not sure! According to the latest report from him, the horde was well worth burning a few ounces of petrol to claim. I am supposed to view the assortment this afternoon. Understand that this won't alleviate the sadness over the loss of what went to the disciples of the needy, but beggars can't be choosers right.
Still, as you can see, I am surrounded by idiots! The moral of these tales is not to let this happen to you.
Posted by Chuck Wells at 7:53 AM

Heed this lesson! I could go on with my story....a familiar one...my Mom threw out my beloved stash back in the day. *sniff*