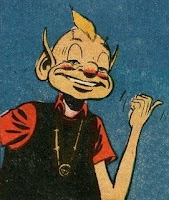 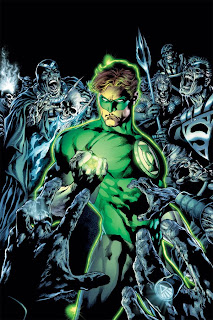 (Spoilers ahead!)
I am a big fan of zombie movies, particularly the George Romero films Night of the Living Dead, Dawn of the Dead, Day of the Dead and Land of the Dead. I cut him some slack for Diary of the Dead and I'm looking forward to seeing his latest, which is currently called Survival of the Dead and yes; even the remakes by other directors of Night and Dawn, are entertaining. 28 Days Later and its sequel, 28 Weeks Later are pretty cool, too. You know, that kind of stuff is lots of good creepy fun.
So what does that have to do with this edition of Rayboy's Review?
Well, despite my reticence for big crossover events, this DC Comics series effectively revives dozens of previously deceased heroes, villains and supporting characters as "Black Lanterns". For lack of a better description, that is code for zombie drones for an unrevealed master villain [Yes; I do know who that mystery villain is going to be, but some folks may want to wait and see for themselves.] and zombie stuff always gets my attention.
Blackest Night #2 is pretty gripping right from the start as Ray "The Atom" Palmer tries to redial his friend Hawkman, who hung up on him last issue. Ray should count his blessings that he didn't travel through the telephone lines in time to be murdered by a couple of old friends last issue. Sadly, Hawkman & Hawkgirl were offed by the revived pair and now they too have been resurrected as Black Lanterns. Hawkman picks up and invites the Atom to come on over for a chat, but we'll have to wait and see what happens later, because the action jumps to Gotham City where a conversation between Commissioner Gordon and his daughter Barbara is interrupted by the figure of Green Lantern falling from the sky and crashing into the famous Bat-Signal.
The action then jumps to Amnesty Bay where a contingent of Atlanteans headed up by Tempest (formerly Aqualad) and Mera have arrived to move the mortal remains of deceased Justice League member Aquaman to a more politically correct berth within the undersea kingdom. That's apparently not going to happen, as the deep six-ed hero confronts them as yet another revived Black Lantern.
The reader gets brought up to speed on things happening within the magical community as the physical corpse of Boston Brand takes on its own life as a Black Lantern, while his essence remains active as the ghostly Deadman. Weird! Also of interest is the futile attempt of the black rings to revive deceased former Teen Titan member, Dove. It seems that Don Hall is at peace in the hereafter and the Black Lanterns will simply have to make do without him, although they do settle for his brother, Hawk. Plus as a gathering of the Spectre, Phantom Stranger, Zatanna and Blue Devil ponder the unfolding events, they are approached by Black Lantern Pariah with a dire warning that culminates with the conversion of the current Spectre/Crispus Allen into another Black Lantern; who appears to have a mad on for former Spectre host, Hal Jordan.
Back in Amnesty Bay, Black Lantern Aquaman unleashes the fiercest creatures of the ocean against the Atlanteans and they are all quickly slain. Last issues super-fatalities are added to, when Black Lanterns Dolphin and Aquagirl manage to slay Tempest, but not before Mera barely escapes with her life.
This issue closes out with Green Lantern and the Flash emerging successfully from their battle with Black Lantern J'onn J'Onzz, but oops; he isn't really defeated and he has some incredible back-up in the form of an undead assortment of Black Lantern Justice Leaguers including Firestorm, Elongated Man & Sue Dibny, Hawkman and Hawkgirl.
Writer Geoff Johns can occasionally irritate me, but so far this mini-series has got the goods and I'm finding it worth the trouble. Artist Ivan Reis is supplying some really good artwork and if he hadn't already gotten peoples attention on the standard Green Lantern book, I would say that this series would probably make a name for him. Who knows how all of this will ultimately end up. The Black Lantern entourage was already quite extensive and if A-Lister's are going to continually join their ranks throughout the entire mini-series, then the DC Universe will certainly be one barren place when things are all over.
Posted by Chuck Wells at 2:40 PM