Great Superhero Movie Lines: "I like to play with things a while before annihilation." 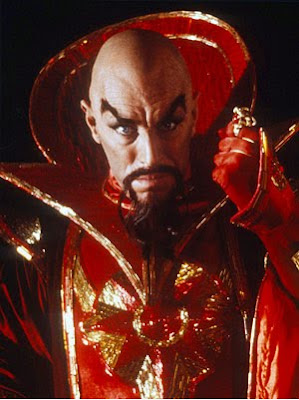 Sometimes "camp" just seems to work, the 1960's Batman series wasn't exactly the Dark Knight at his best, but it was at least fun to watch and "kids" from those years still fondly recall Adam West and Burt Ward as the Caped Crusaders.
The same can be said for the 1980 film version of Flash Gordon, based on the old comic strips and early Hollywood matinee serials. Max Von Sydow starred as the evil Ming the Merciless, alongside Sam Jones as Flash, and eventual James Bond 007, Timothy Dalton.
This line was taken from the Emperors pithy response to a query about the fate of the planet Earth.
Plus there was a kicking rock soundtrack provided by the band Queen. "Flash! Ah-ah. He'll save everyone of us!"
Posted by Chuck Wells at 1:43 PM

Love Flash Gordon! Lot's of memorable quotes from it. Most of my favorite lines are from General Kala and that great accent; "Dispatch war rocket 'Ajax' to bring back his body."
Fun movie.