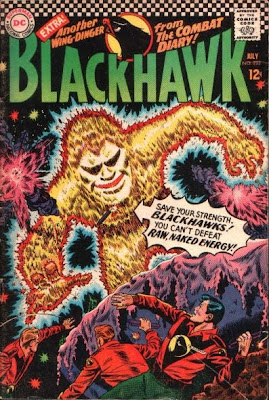 I recently picked up a cool run of Blackhawks from the 1960's and I am hoping to grab even more issues of this fun title. The idea of collecting Blackhawk has been on the backburner for me for a few years, and after getting a handful of them - I really want more.
"The Man From E=MC2" from Blackhawk #222 (July 1966) casts the "Magnificent 7" as daring volunteers for a scientist named Darnley, whose attempt to test his conversion theory results in near catastrophe. The Blackhawks (Andre, Chop-Chop, Chuck, Hendrickson, Olaf, Stanislaus & Blackhawk) barely escape the centrifugal test capsule when it begins glowing with a strange energy and then suddenly vanishes. Determined not to risk the lives of the famed aviators a second time, Darnley himself sits in the hot seat for the next trial, but after a freak energy bolt subsequently lashes out to knock the Blackhawks for a loop, further tests are cancelled.
Later that night, a giant energy being appears and approaches a nearby power plant in search of sustenance. After a hurried S.O.S. alerts the Blackhawks to the danger, the team soars back to the rescue only to have their planes conk out in midair; an effect of the energy beings powerful presence. Parachuting to safety, the group discovers the bizarre being draining the plants generator and growing even larger.
It is soon revealed that during a previous experiment, Darnley inadvertently brought the creature to Earth from the Sun and he is now forcibly having to share his physical body with the beast. While Blackhawk, Chop-Chop and Olaf confront the scientist in his lab, the other team members launch another aerial assault against the evil entity once its true conquering nature is uncovered.
Blackhawk ultimately manages to borrow a massive robot, which was scheduled to be part of an upcoming moonshot, from another nearby lab (how convenient) and then he tricks the energy creature into merging with the incomplete mechanoid. Once the alien terror comfortably settles within the robots frame, Blackhawk activates some handy magnetic circuitry and the creature is quickly destroyed.
The issues second feature is taken from the Blackhawk World War II Combat Diary. "Six Pawns For a King" starts with a bang, as the Blackhawks rescue an abdicated monarch from a train, efficiently snatching him away from his Nazi captors and they return him successfully to his own land despite being imperiled along the way. However once they arrive safely in his small European kingdom, the ungrateful lout summarily places the team under arrest, despite his own daughters pleas on their behalf.
It seems that the king was the victim of Nazi propaganda, which led him to believe that his own subjects wanted their homeland to remain neutral during the war. Learning that no good deed goes unpunished, the monarch is shocked to see German soldiers marching into his own castle grounds, violating the treaty that he had agreed to with the best of intentions. It's a good thing for him that the Blackhawks are such versatile devils. Having already freed themselves from the dungeon, the fighting aces tackle the Nazis and soon rebuff the invasion. Humbled after all that they've done for him the king recommends the team for his country's highest honor.
F. Herron writes two dependable tales that nicely skirt the golden age period from which the combat-oriented Blackhawks originated from and the modern superhero-era into which they survived as a long-running feature. The really fun artwork on this issue is provided by Dick Dillin and Chuck Cuidera. Simply put, despite hokey elements to the opening sci-fi feature, their illustrations are really lush and beautiful to look at. Fans today might rankle at some the implied ethnicity for a few of these classic characters however, by this era at least, Chop-Chop was no longer being portrayed as a comic relief coolie. Instead he is a viable member of the group with his own identical uniform. By Gar!
Posted by Chuck Wells at 2:21 PM