In Search of One-Shot Heroes (HELP!) 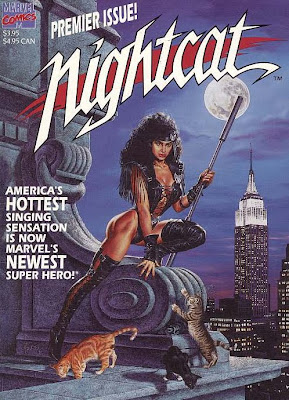 I seem to remember a comic that came out a decade or more ago that was called "The Amazing Moth", but I may be wrong about the title. Note: I am not referring to the more recent Steve Rude-created character, The Moth. It is frustrating not remembering this book better, since I did actually purchase it at the time it was released. I do recall that it was published by a no-name independent as a single black & white issue. I'm unsure if additional issues came out, but I don't think it made much of an impression. I can't even find a scan of this book on the web. It's that far outside the mainstream.
Thinking about this book has got me wondering about other forgotten "one-shot" heroes or teams and I need your help in documenting some of these titles. THIS IS A PLEA FOR ASSISTANCE!
Nightcat was an aborted attempt on the part of Marvel Comics to create a real-world character that would also star in its comic books. Portrayed by Jacqueline Tavarez, Nightcat was intended to be both a comic book superhero as well as a real-world singer. The experiment got as far as the release of one comic book and one music CD before the plug was pulled in 1991.
For the record, I have absolutely no interest in this book whatsoever. I've only used it as an example of the obscurity level that I am looking for, and even then I am really only interested in one-shot or short-run heroes from independent publishers since the dawn of the modern direct-only comic shops (circa the early 1980's & beyond).
Now, I am pretty familiar with the stuff released by the bigger publishers like Image, Dark Horse, Eclipse, Comico, First, etc., what I would really like some help with is recalling heroes from smaller companies or self-published properties. Atomic City wouldn't necessarily be considered obscure, but it is a title that is more in line with the kind of stuff that I would like some help identifying.
Anybody out there that remembers some of these "also-ran" characters, please speak up. If you have a scan of the cover, character or any depiction of the hero, it would be really great if you could provide a link to information or artwork.
C'mon guys! Let's lift these one-shot heroes out of the gutters and put them back in the limelight, at least for a couple of minutes, and that is a pretty-please-with-sugar-on-top kind of request.
Posted by Chuck Wells at 2:21 PM

Geez, Nightcat was a bad book, but a fun cover to paint. Those are actually my cats in the painting. Her manager was a friend of Stan's hence the idea of pushing her through a comic. She had a brief taste of fame on MTV Dance Club and later in Tromeo and Juliet and several Playboy Lingerie Specials. I got a lot of the one shot covers, including NFL Super Pro.

I didn't remember that you did that cover, Joe. I am thankful that I didn't make any derogatory comments about the book, only that I wasn't particularly interested in it.

With Marvel's name on it, Nightcat will likely pull a mention or two out of the air from time to time, but I believe that this book shares a similar degree of obcurity with most readers of things off the beaten path as some of the stuff that I am curious about.

I do remember NFL Superpro, and since you've posted here, I must admit that I actually did buy a copy of Nightcat -out of curiosity - when it was published. Nothing about it really grabbed me.

It was awful! Jimmy Palmiotti (his first inking job) STILL laugh at how bad it is! lol I mean, she drove a "CAT-illac"!