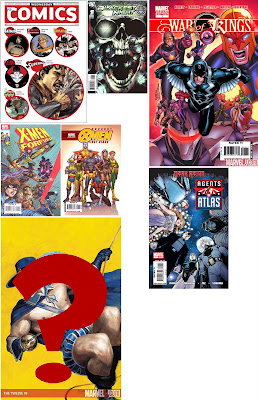 Yeah!
I know the year hasn't quite run its course, but with the Baltimore Comic-Con and Dragoncon looming, it seems like a good time to regroup before the final push towards the holidays.
Wednesday Comics slides past the halfway mark with this weeks issue #7 and for me the different format, large-size tabloid weekly series has been a big HIT. It has been fun from the get-go, beautiful in most of its execution and despite a couple of lesser inclusions (Wonder Woman in particular), for the most part I've enjoyed it and I have to say that I hope DC Comics revisits this comic style again, with hopefully a broader representation of subject matter from their long publishing history (humor feature, anyone?).
Blackest Night has had one of the longest build-ups of any of the morass of mega-events from either of the "big two". Despite my reticence for how many of the classic characters are being treated at DC, I must admit that at least the first two issues of the actual "mini" have been really entertaining. I wish that I had a clue about how this thing will conclude, and especially if any of the zombified heroes who've been resurrected as Black Lanterns will be returned to four-color life at the journeys end, but BN has been another HIT (thus far).
The Twelve from Marvel Comics hasn't managed to make a return to the stands at all this year. For those who plunked down their hard earned shekels for this popular mini-series, that has been an ill pill to swallow. Comments from the execs at the House of Ideas haven't really helped settle the rancor among fans who have been vocal about getting screwed over The Twelve. Behind the scenes there does seem to be some activity going on, but there has been no major announcement over when (if ever) it may return. This one has been a serious MISS for the current calendar year!
Agents of Atlas, again from Marvel, has proven to be a solid hit for the company, but for me it falls squarely into the category of MISS. I really can't put my finger on what I don't like about AoA, but if I was pressed to come up with one, I suppose it would have to be the absence of Leonard Kirk whose work on the original AoA mini-series was a large part of what I like about the mini-series that started the ball rolling. The split art duties that were featured in the couple of issues that I sampled of the ongoing book didn't help win me over.
Uncanny X-Men: First Class is another Marvel title that ended up leaving me cold. Like the ongoing Agents of Atlas series, I was looking forward to buying this book after several years of zero X-Men purchases and the appeal of this one I can sum up pretty easily. It was the Second Genesis group - in their original costumes - actually looking like superheroes that grabbed me upon release of the first issues cover. I bought it, took it home, and then the unthinkable happened. I hated it! Roger Cruz had a nice debut on some Marvel books a few years ago, but in my estimation he's fallen pretty far off the wagon. Simply put, the insides didn't live up to that awesome cover, so Uncanny X-Men: First Class was one and done for me. A definite MISS!
I'm going to stick with Marvel for two more entries, gotta get it out of my system, so bear with me.
I'll get this one out of the way first, with a single caveat, War of Kings was a HIT. Sadly, they couldn't resist the urge to drag it out into a few other post event tie-in issues, mini-series and yes; yet another follow-up event. Somebody really should punch Marvel in the nose. Go to their website and see just how many of this years (or last years) various crossover events haven't truly ended. Yeah! I know.
X-Men Forever falls into a weird place for me where it is both a HIT and a MISS. I love Tom Grummett's work and was glad to actually be able to follow another book that (like Uncanny X-Men: First Class) would return me - after too long an absence - to the world of Marvels Not-so-Merry Mutants; but stop the presses. Grummett isn't REALLY going to be the ongoing artist on this book, just the primary penciller for specific story arcs, with breaks built in which allow other artists to do fill-in chapters, while Tom recuperates. Adding insult to injury, writer Chris Claremont is really stepping out into left field and following his own muse, spinning an alternate continuity in this title. I can buy that Wolverine is highly overexposed in most Marvel titles, but why fill the void created by his absence with another character who is cut from the very same cloth (Sabretooth). Hey, if you're going to do something completely different, why not pull Thunderbird out of mothballs to fill the irascible character spot, or bring back hotheaded Sunfire and guys, if you had to kill somebody off, Gambit was right there. You had your chance!
So, that's how things have looked for me to this point. I don't buy too many hot of the presses titles any more, and no; I don't wait for the trades. I stick with older back issues culled from conventions and eBay. I figure if comics have gone to around $4 apiece, why not burn that dollar amount on affordable stuff that still looks like a comic book, reads like a comic book and smells like a comic book.
Oh, yeah!
Posted by Chuck Wells at 8:02 PM

The problem with the big crossovers is that they have burned me out so much with the general titles, something like Blackest Night comes along and if I didn't find the thing depressing, I'm not really sure what titles I should be getting. Can I get just the main story or do I have to get all the Green Lantern books and one-shots to get the whole story. I'm sure DC would say no, but then that's what they said about their Infinite Crises mess and none of them told a complete story by themselves.

Instead, the crossovers served as a jumping off point. I was already on the fence with Guardians of the Galaxy, the majority of the characters not not seeming that familiar and all drabbed down, so it seemed a good time to bail on that series. I got the first issue of Darkhawk but again, the character was so far different from the original concept and the artwork so over-photoshopped that the cruder but more simply colored reprint was light-years ahead in actual readability. It also served to underscore how much Darkhawk was meant to be a more street-level modern day Spider-man type.

As far as Agents, again the characters are mostly drabbed down, the final issue of the mini left a bad taste in my mouth and then perusing through the first issue and seeing them turning over bad guys to the dragon who eats them... Hadn't really looked back.