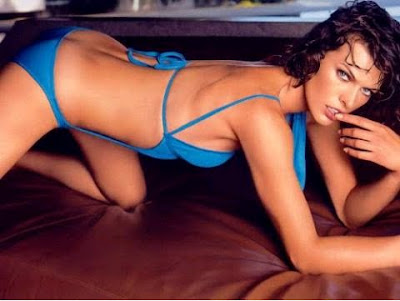 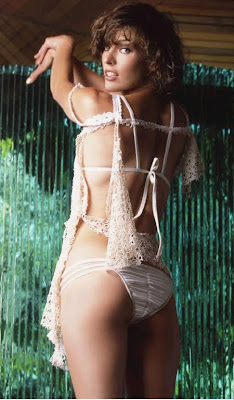 Ukrainian-born actress & model Milla Jovovich has earned serious genre chops with her signature role as Leeloo, an alien who was the "perfect being" in the science fiction film The Fifth Element (1997), Ultraviolet (2006), and her popular horror trilogy of Resident Evil (2002), Resident Evil: Apocalypse (2004) & Resident Evil: Extinction (2007). There is also a fourth film in the works for the latter series.

Milla got her start at age eleven in the modeling world, after her family immigrated to the U.S. She learned to speak English in a mere three months, but was teased by her peers who often called her a "commie." Apparently these foolish mortals didn't realize how smoking hot she would turn out to be someday. For a gal with little "action" going on upstairs, Milla more than makes up for any perceived lack of "boob-age" in a culture that worships large tata's. She pretty much has everything else necessary to kick the living snot out of undead zombies, snarling were-creatures, albino-vampires and still happily satisfy horny old comic book fans.
Trust me, that last bit, I can definitely attest to!
Anybody who can make a skimpy costume look good, which was made out of nothing but ace-medical bandages, certainly deserves to be remembered for posterity as the latest "Gal" Friday.
Posted by Chuck Wells at 8:47 PM

I'll never forget when I first saw her on an episode of "Married with Children". Mind-numbingly hot.

She's always been a favorite of mine