How NOT to do a Superhero Movie: Captain America (1979) 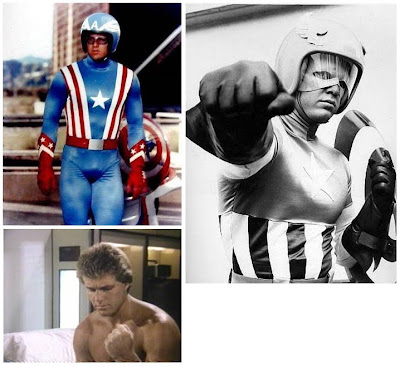 You can sum up the entire premise of the twin 1979 Captain America television films thus; F.L.A.G. – Full Latent Ability Gain, “the ultimate steroid”, plus a not-so-spiffy van equipped with a motorbike (topped off by a clear shield, which conveniently doubles as Cap’s usual offensive weapon) and a big blond lummox to assay the part of Marvel Comics resident living legend of World War II. For those of us who are still reeling from these two crummy flicks, there is at least some nice eye-candy in the form of Heather Menzies in movie of the week #1 and Connie Selleca in movie of the week #2. The second of these deplorable set pieces was titled, Captain America II: Death Too Soon. In my opinion, death didn’t come quickly enough to avoid these awful teleflicks. One interesting aspect of these largely forgotten TV movies, is that many seemingly normal folks that actually do recall them, simply overexaggerate their relative worth.
Don’t believe the hype! If you ever get the chance to watch either one of them and discover something entertaining here, please donate your organs to science, because something is wrong with you. lol
Posted by Chuck Wells at 2:24 PM

At least Matt Salinger would look more like Cap than Reb Brown did here when he got HIS movie...in spite of the rubber ears!!