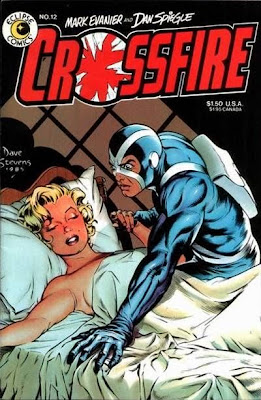 Crossfire was a spin off of DNAgents, written by Mark Evanier and illustrated by Dan Spiegle for Eclipse Comics. The series ran for 26 issues between May 1984 and February 1988.
The series followed the adventures of bail bondsman Jay Endicott, who assumed the identity of a notorious criminal, who was murdered while committing one of his crimes. Endicott decided to use the original Crossfire costume to fight crime as a superhero, while impersonating the original in order to take advantage of his reputation and then hunt down underworld contacts.
During an early adventure with the DNAgents, Endicott fell in love with their member, Rainbow, but he was also seriously wounded. While in the care of their organization, he was given specific enhancements to his body and his blood was replaced with an artificial chemical that mimicked the characteristics of blood more efficiently.
Writer Mark Evanier used his experience inside the Hollywood entertainment industry to feature secondary stories of characters trying to work and survive within that business. Despite the intricate plotting and topnotch Dan Spiegle artwork, Crossfire sold poorly. This eventually forced a change in format from color to black & white printing to reduce expense. Subsequently the series took on a more realistic tone to the featured stories, with Jay Endicott making do with only his mask after he was forced to destroy the rest of his costume to escape police custody.
Posted by Chuck Wells at 11:50 AM