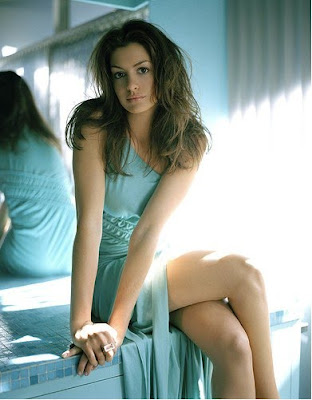 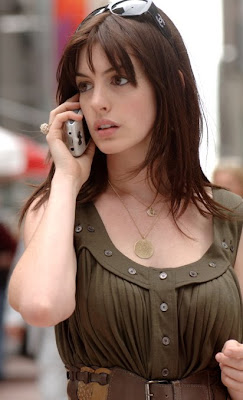 I thought long and hard over which lovely lady to feature for this weeks "Gal" Friday post, since I also wanted to at least tie into my "Go Ape Shit Week" theme, and then I hit upon a great choice who pleasantly went "ape shit" in a way that we can all appreciate here in the Catacombs.
In 2001, Anne Hathaway made a big screen splash as Mia Thermopolis in the Disney family comedy The Princess Diaries, and over the next three years she continued to star in family films, reprising her role for its sequel, The Princess Diaries 2: Royal Engagement and also appearing as the titular character in Ella Enchanted (both in 2004).
In a surprise move, Hathaway was featured in several nude and sexual scenes in Havoc and Brokeback Mountain (both 2005). Although the content of these two films was radically different from her previous films, Hathaway denied that these were attempts to be seen as a more mature actress, citing her belief that doing nudity in certain movies is merely a part of what her chosen form of art demands of her; and because of that belief she does not consider appearing nude in appropriate films to be morally objectionable. Anne Hathaway is my hero!
She has subsequently co-starred with Meryl Streep in The Devil Wears Prada (2006) and she appeared in Becoming Jane (2007) as author Jane Austen. She earned widespread critical acclaim for her lead role in the 2008 film Rachel Getting Married, for which she was nominated for the Academy Award for Best Actress and followed that up with Get Smart. So far in 2010, she has starred in box office hits Valentine's Day and Tim Burton's Alice In Wonderland.
Probably no other actress makes sweet & sexy look so easy than Anne Hathaway.
Posted by Chuck Wells at 10:48 AM

My heart goes all a'flutter when I see this long-legged, dark-eyed and long-lashed lovely. Hubba, hub-BA!

Also, Chuck, I didn't get to you in time, but I have three ape stories coming up on April 30 for "The Apes of April." Really, though, as far as I'm concerned any day is Go Apeshit Day. If you want to join in with more apeshit on April 30 please do.

Yeah, Pappy! I know how you feel about Anne. What a dame! I'm sure that I can field another "Go Ape Shit" story to coincide with April 30, so plan on my participation.

I go APE over Anne Hathaway or I'll go ALL THE WAY for Hathaway!Appropriate for your Jungle and Ape week.You remember a song called Ape Call by Nervous Norvous(he had a novelty hit in the 50s with a song called Transfusion.)Liam