At the Movies: Kick-Ass 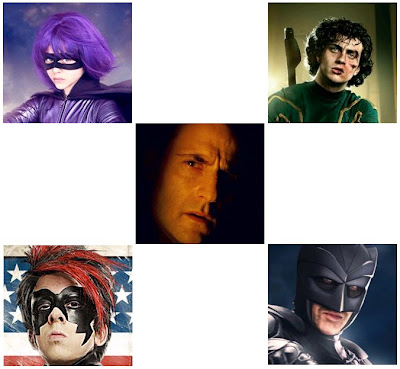 Dave Lizewski (Aaron Johnson) is a typical high school kid who stumbles through life somewhat under the radar. As a comic book fan with few friends, he lives alone with his father and suffers the normal travails that most geeks can easily relate to.

Having no pressing reason to do so, one day he makes the inspired decision to become Kick-Ass, a superhero with no powers, and he quickly discovers that he may have bitten off more than he can chew. Based on the Marvel Comics series written by Mark Millar and illustrated by John Romita, Jr., this ultra-violent movie pulls no punches and is all the better for having stuck to its creative guns.

The reviews are full of commentary about the full-volume dialogue coming from the mouth of young actor Chloë Grace Moretz (11 years old during filming), and the language involved may actually shock some movie-goers. Blood, gore and ample violence abound throughout, but continuing the trend of comics-to-film adaptations that really do work, “Kick-Ass” proves that this kind of material when taken seriously does lead to an outstanding movie-going experience.

Nicolas Cage makes one of his best film appearances in some time as “Big Daddy”, a former cop who, in his quest to bring down an evil drug lord Frank D'Amico (Mark Strong), has trained his eleven-year-old daughter to be the ruthless vigilante Hit-Girl (Chloë Moretz; who wonderfully steals the movie). Add in very well-chosen young supporting actors Clark Duke (Hot Tub Time Machine), Evan Peters, Lyndsy Fonseca and Christopher Mintz-Plasse as the last of the costumed “heroes”, The Red Mist, and it all adds up to one excellent film.
Yeah, Kick-Ass is courting controversy for its casual use of profanity and violence, but if you are a comic book fan, you’ve simply got to see this movie. Recommended!!!
Posted by Chuck Wells at 3:55 PM