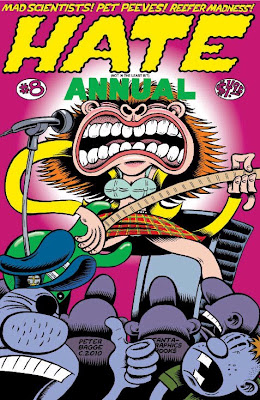 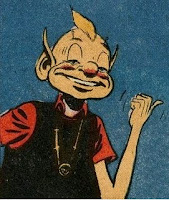 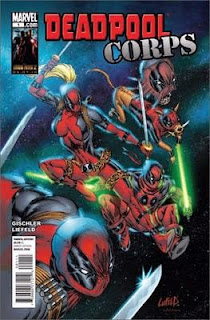 It's a perfect spring evening outside, which is ideal since I just got back from a Chinese buffet and I really need to go walk some of that off. That being the case, Rayboy's Review(s) are gonna be a bit brief this time around.
Well, it has been quite some time since I went into a comics shop and purchased six brand spanking new comics fresh off the stands. This week I picked up Booster Gold #29 & 30, Deadpool Corps #1, Hate Annual #8, Ultimate New Ultimates #1 and Ultimate X #2.
Fantagraphics Hate Annual #8 written and drawn almost entirely by Peter Bagge (with a single story written by James Whorton, Jr.) is everything you would want from Bagge. You get a new Buddy Bradley & Lisa story, "Creative Outlet" which is reason enough to buy this issue, since the rest of the material is gathered from a variety of previously published sources. Fantagraphics stuff always reels me in and this issue was a nice surprise this week. Give it a try, folks!

Booster Gold's #29 & 30 polishes off Dan Jurgens and Norm Rapmund's excellent run on this title in "The Tomorrow Memory". Under these two gentlemen and a few other fine creators, Booster Gold has consistently been one of DC Comics best titles. By making creative use of the many crossover events of the past many years, these guys struck "gold" and made Booster not only "The Greatest Hero You've Never Heard Of!", but also a series that I'm really gonna miss, now that Jurgens wishes to move on to other things (at least for awhile). I will keep my fingers crossed that Dan will follow through on his promise and return to chronicle Booster's adventures again someday (plus hope that the incoming creative team doesn't screw the pooch and get this book cancelled before he can).

Marvel Comics scored a trifecta out of me this week with two books that are part of their Ultimates line, and no wonder considering who's drawing these books, and another title that was a hoot and a half. Ultimate X#2 continues the story of what happened to the X-Men and their heirs after worldwide chaos, carnage and the deaths of a huge chunk of the Ultiverse/?. Don't ask me to explain all of that here, I'm just loving the Arthur Adams artwork, and it is a thing of real beauty too.

Same goes for Ultimate New Ultimates #1, try saying that fast three times, which does the very same thing for the Ultiverse version of the Avengers, drawn ever so beautifully by the estimable Frank Cho. The scene where Hela strips down to seduce Thor in Valhalla is worth the price of admission alone, but there is much more going on in this book too and you've really gotta see that six panel gatefold cover. This book has an unrelated back-up short story preview based on Philip K Dick's Electric Ant that is very forgettable.

The biggest surprise of all this week was how much I enjoyed Deadpool Corps #1 by writer Victor Gischler and illustrated by ROB LIEFELD. (Um, yeah, that guy) I swear it's like this was the book that Rob needed all along to get his groove back. Talk about funny stuff! Deadpool Corps is the perfect title to kick off the summer convention season, and lo and behold, Liefeld will be attending the Heroes Convention in Charlotte, NC, this June. Not only am I going to continue buying this hilarious book, but I'm gonna have Rob sign my copies too. He deservedly got ripped a number of times over the years for his many art faux pas and other grievous storytelling errors, but if he can keep this up for a while, he may just win back a few of his fans. Frank Tieri & Matteo Scalera provide a second feature with Deadpool hilariously undergoing psychiatric therapy; or does he?