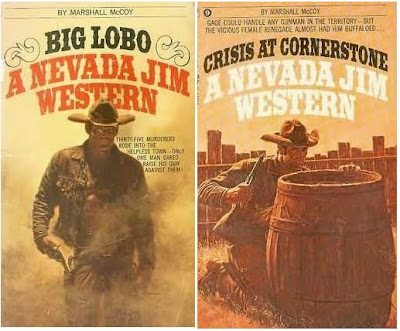 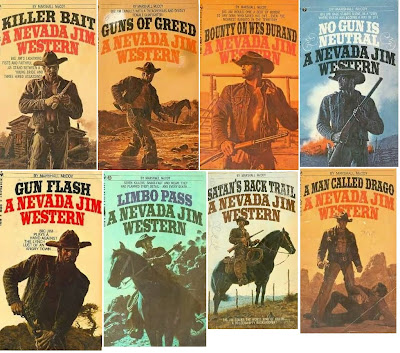 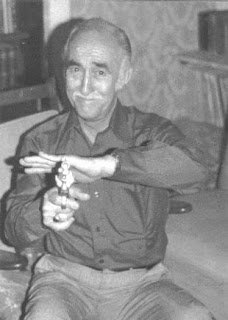 I received a package of old paperbacks in the mail yesterday that has prompted me to post something a bit different today.
Australian author Leonard F. Meares has become one of my favorite authors over the last few years and I only became aware of him when I saw an online gallery of James Bama covers from the late 1960's that were used on Meares Americanized Nevada Jim Western series. The covers for many of those lovely Bantam Books paperbacks are pictured above. Originally published by the Horwitz Group as "Big Jim Rand", Nevada Jim Westerns follow Jim Gage, a former Cavalry sergeant who leaves the service to track down the murderer of his brother, and then once this task is successfully accomplished over the course of several novels, his further exploits continue in the town he eventually settles in called Cornerstone.
Meares was perhaps best known for an even longer running series of novels, again originally published overseas by the Horwitz Group as Larry and Stretch westerns, but adapted for Bantam as "Larry and Streak" westerns. In fact between 1955 and continuing until his death in 1993, the prolific Meares could turn out around thirty books a year. He eventually wrote 746 novels, the majority of which were westerns under a variety of pseudonyms such as Ward Brennan, Glenn Murrell, Shad Denver, Brett Waring and Marshall Grover (this too was changed by Bantam Books into "Marshall McCoy", for Meares American volumes).
Of course James Bama, whose cover artwork on the Nevada Jim Westerns attracted me to Meares terrific writing, is famous for producing almost all of the covers for the first sixty-seven Bantam Books paperbacks reprinting the adventures of pulp hero, Doc Savage. Bama went on to enjoy a career as a fine art painter of naturalist western subjects.
Whether as Marshall Grover or Marshall McCoy, Leonard Frank Meares westerns are - in my humble opinion - superior to many western authors who may be more familiar to most fans. I won't name any in particular, but simply put, there are some top gun writers whose work on "oaters" (aka cowboy tales) has always bored the living hell out of me. Meares doesn't. His westerns resound with the same level of cinematic clarity and excitement that fueled the heyday of Hollywood's classic film westerns on the big screen. More mythology and folklore than reflection of reality, Meares heroes travel the the unknown west meting out true two-fisted justice to evil back-shooters, ruffians and land barons in a most satisfying manner.
I have painstakingly sought out, tracked down and acquired a dozen beautiful copies of the sixteen Nevada Jim Westerns that Bantam released (out of 70 "Big Jim Rand" novels that Meares actually penned). The pricing on these old paperbacks can vary wildly and many often fetch prices up to $50-70 dollars each, even in less than desirable grade. I believe this is largely due to Meares excellent writing talent and just how wide his fame spread worldwide. I also have to add that many online sources mistakenly identify Larry and Streak volumes as Nevada Jim Westerns, so word to the wise, while I've read & enjoyed his Larry and Streak paperbacks, my favorite Meares series is his Nevada Jim Westerns. Bantam Books tightly edited the longer, original Horwitz material and they also excised some of the more racist elements in depictions of minority characters and this served the Americanized volumes very well.
The following list of Bantam Books Nevada Jim Western editions are the entire actual run as best as I can determine: A Man Called Drago, Bury the Guilty, Guns of Greed, Die Brave, No Gun is Neutral, Limbo Pass, The Killers Came at Noon, Seven Westbound, Behind the Black Mask, Killer Bait, Big Lobo, Satan's Back Trail, Gun Flash, Justice for Jenner, Crisis at Cornerstone and Bounty on Wes Durand.
I am still looking for high grade Bantam editions of A Man Called Drago, Big Lobo, The Killers Came at Noon and Justice for Jenner. Depending upon the condition, I will pay up to $25 each. I can't recommend these novels highly enough.
Posted by Chuck Wells at 8:20 AM

Those have always been some of my favorite Bama covers! You GOTTA post larger scans of those!!!! :-)

I will try to make time soon to scan my own copies, Joe.

The images featured in my post were saved as reference some time ago as I sought out Nevada Jim's.

My actual Nevada Jim Western paperbacks are mostly pristine copies, a couple do show a slight bit of shelfwear, but most of mine were acquired from warehoused sources and had never been offered for sale in bookstores.

Actually there are seventeen Nevada Jim Westerns. The one missing on your list is Requiem For Sam Wade

I can find absolutely no confirmation that this title as a Nevada Jim Western from Bantam Paperbacks, so please, if you can provide that (or a cover scan) - it would be most appreciated!

Been looking through my Navada Jim Westerns, Requiem For Sam Wade, Spur Route and Hang Rope Fever are published by Horwitz. Sorry for the confusion.

Is the list above in order of when they were written? I am in the process of acquiring these books and would like to read them in the correct order. My grandfathers name is Jim Gage and he has a copy of Gun Flash that he gave me to read. He bought it a long time ago because the character had the same name name as him. He didn't even know there were others so it will be neat for us to read the rest.

Shawn, it's not really going to matter much in what order you read these excellent paperbacks. There were seventy "Big Jim Rand" novels written overseas by Meares. Bantam reissued sixteen of them stateside as "Nevada Jim Westerns", and these were published out of sequence anyway from the originals. The Americanized books were also heavily edited to remove racist overtones and certain characters and locations were renamed from the Australian editions. In my opinion, the books are standalone, and can be read as you acquire them. I highly recommend that you dive right in as you pick them up!

The only Bantam editions that I'm still looking for are: Justice for Jenner, Killer Bait, and a replacement copy of Bounty on Wes Durand.

That's good to hear. I will definitely dive right in as they come in. I have found a lot of them on amazon. The titles you seek come up under an amazon search. Not sure what condition you are looking for. I'm just looking for readable copies.

I admit that mint condition is my primary predicate. Most of my copies were acquired from warehoused sources, where the books were never offered for sale. And damn do I hate having lost touch with the seller that I picked them up from (he eventually went incommunicado). This guy was based in Colorado and had access to ten unopened cases of Bantam paperbacks from the 1960s that had simply been sitting in the back of a stockroom.

Mixed genre stuff too, sci-fi, detective, western, romance, Doc Savage, etc. These books were pristine, and even smelled new! The handful of Nevada Jim Westerns that I bought from him are the jewels of my collection. You have to realize that some of these were published with a cover stock that was virtually identical to the interior paper, with only a spray varnish coating to differentiate the covers from the books insides.

I knew Marshall McCoy/Marshall Grover very, very well. He was like a second father to me and I was like a son to him. Always loved his westerns, whether they were about Larry and Stretch (Larry and Streak in the Bantam years) or Big Jim (Nevada Jim for Bantam). Apparently they hired James Bama to paint the covers in a deliberate attempt to cash in on the popularity of DOC SAVAGE at the time.

Thanks for stopping by, Ben!

I used to find MASHALL MCCOY westerns in thrift stores, but not any more. They're available online at inflated prices. The cover artwork might have something to do with that.

"The pricing on these old paperbacks can vary wildly and many often fetch prices up to $50-70 dollars each, even in less than desirable grade. I believe this is largely due to Meares excellent writing talent and just how wide his fame spread worldwide" Uh...it's more due to the Bama covers. I own a complete set, and I bought them for the cover art.