At the Movies: Clash of the Titans 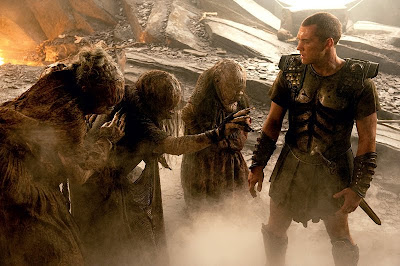 The newly released Clash of the Titans has earned nothing but scorn for its post-production (and badly-botched) 3-D transfer effects, and I appreciate all of the early reviews that prompted me to save those few extra bucks and instead catch a regular "2-D" version. However, I suspect that many current reviewers (yes, I'm talking about the usual gang of genre mavens) are also leaning towards trashing this updated remake, primarily due to their misplaced and slavish devotion to the 1981 Ray Harryhausen original. That's too bad!
I even read one guys warning on a comics forum to "run away from this dog" and save your bucks. I can't agree with that. Perhaps these offended folks have chosen to forget the originals many plot holes. Maybe they prefer the originals larger slate of recognizable Shakespearean-trained actors who basically stood around hamming it up in Olympus. Possibly they were just enamored of the mechanical owl Bubo (who does make a terrific comic relief cameo as a nod to the earlier film). Whether the critics take exception to the remake out of their nostalgia for cheesy special effects or not, director Louis Leterrier need not hid his head in shame.
Clash of the Titans is a fun film-going experience starring Sam Worthington, Liam Neeson, Ralph Fiennes, Alexa Davalos, Liam Cunningham, Gemma Arterton, Ian Whyte, Nicholas Hoult, Jason Flemyng, Mads Mikkelsen, Pete Postlethwaite, and Elizabeth McGovern. It's a popcorn movie and if you don't like suspension of disbelief scenarios where you just turn your brain off and enjoy a wild ride, then give this movie a pass by all means. If you enjoy seat of your pants thrills and watching mythological characters facing off against wicked large creatures and capricious gods, then you might want to catch this one folks.
The original Clash starred newcomers Harry Hamlin and Judi Bowker as Perseus and Andromeda. The relationship of these two central characters is vastly different this time around, and this aspect is also at the heart of some reviewers contempt for the remake. Again, that's too bad. Perseus is portrayed entirely different by Sam Worthington and rather than focus on how many times he stresses during this version how he will tackle his quest "as a man", how about focusing on how he actually plays Perseus - as a man - and less of a demigod. That point is central to how this film differs from the first one, and here it works pretty well. Look if you love the original Clash of the Titans, then fine, but back then Harry Hamlin never even got dirty while running around on his quest. In short, like most period pieces from those days, they made it look too darn easy.
I think taking on giant scorpions, a trio of weird witches, the gorgon Medusa, the brutish Calibos and the massive Kraken would at least leave you a little soiled at the end of the day, and Worthington's Perseus definitely reflects that. And so what if he didn't opt to rule by Andromeda's side this time out, considering who else is available, he can be forgiven. Hell, I much preferred luscious Gemma Arterton's ageless Io myself, not that Alexa Davalos isn't fine in her role as Andromeda. She just serves a different function this time out and this character is more limited than in the original.
Since I've already gone this far to err on the side of classic movie sacrilege, let me also add that Liam Neeson is far more effective than Laurence Olivier was as the King of the Gods, Zeus. Ralph Fiennes is truly awesome as Hades and as a final suggestion to anyone who looked forward to this movie; just go see it and judge for yourselves, but do skip the 3D version. I think the reviewers were right on that score!
Posted by Chuck Wells at 9:56 AM

We just saw Clash of the Titans. It was "edge of your seat" fabulous! I loved watching real men play real men in this version. There is no comparison between this movie and the 1981 version. I'm sick of watching metrosexual actors prance around the screen and the 1981 version was full of them. Go Sam Worthington! Bring on the real men!!!