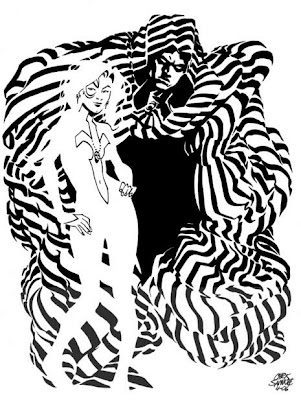 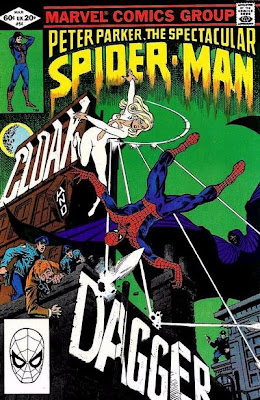 Tyrone "Ty" Johnson and Tandy Bowen aka Cloak and Dagger first appeared in the Marvel Comics series, Peter Parker, The Spectacular Spider-Man #64 (March 1982). The characters were created by writer Bill Mantlo and artist Ed Hannigan.
The pair were teenage runaways who were manipulated by the demonic entity, D'Spayre, into accepting an offer of shelter from some strange men. The two teens were then forcibly delivered to a criminal chemist who was developing a new form of synthetic heroin for Silvermane and the Maggia, and testing it on runaway teens, often with fatal results. Johnson and Bowen somehow survived injections of the drug, and they fled. During their escape, the drug turned them into superpowered beings (they were later revealed to be mutants, and the drug had simply awakened their latent abilities). Tyrone found himself engulfed in darkness and seized by a strange hunger which eased in the presence of Tandy, who was glowing with a brilliant light. Trying to hide his newly shadowy appearance in a makeshift cloak, Tyrone began absorbing the chemists thugs into his darkness while Tandy struck them down with daggers of light. The two teens dubbed themselves "Cloak & Dagger" and declared war on crime, combating drug-dealers and helping other runaway children.
There have been a numerous attempts to launch ongoing Cloak and Dagger series, but none have survived past 19 issues, usually due to low sales. The pair have made appearances as guest stars, in a wide variety of titles, such as Runaways, New Mutants, Marvel Knights, the "Maximum Carnage" story arc in Spider-Man and the miniseries House of M. Cloak and Dagger illustration by Chris Samnee.
Posted by Chuck Wells at 10:47 AM

What ruined C&D for me was Marvel deciding that it wasn't drugs that made them superpowered--it was because the drug activated their MUTANT POWERS. (I believe a recent C&D comic rectified that nonsense.)

The Mantlo/Leonardi/Austin miniseries is a classic because it's so reflective of New York (and Times Square in particular) in the '80s--gritty, dark, and dangerous. There was no reason to retcon them as mutants.

Chuck: This was my favorite comic for a while - I liked the duel between light and dark - even though Cloak was a bit too much like The Spectre - whom I loved as well.

I am another big fan of Cloak & Dagger and remember buying off the rack the issue you pictured. They had a lot of untapped potential.

I wholehearted agree with sroman above that the "they're really mutants!" retcon was a bad idea best ignored. (Didn't they do that Spidey himself, too? Saying it wasn't the radiocative spider itself, just that it triggered his latent mutancy? Blecch!)

Beautiful illo you posted. Thanks for stirring up good memories from the '80s (an era full of good memories!). -- Gary in Omaha