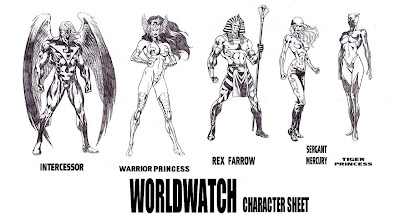 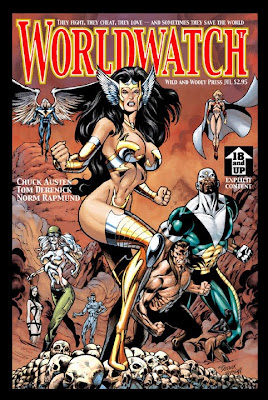 Hot off the heels of controversial work for both Marvel Comics (X-Men, She-Hulk) and DC Comics (Action Comics), in 2004 Chuck Austen created the independently published title WorldWatch, which featured explicit depictions of superhero sex and violence. The series also included back-up stories and features that played up additional aspects of the books mature nature and perhaps intentionally tweaked the noses of fan boys and industry pundits who had grown increasingly hostile towards Austen.

The last page of Worldwatch #2 featured a tongue-in-cheek announcement from the publisher stating that Austen had been fired, and that he would be replaced by notable writer Sam Clemens (the real name of legendary American writer Mark Twain). However, as creator and owner, Austen could not actually be fired from Worldwatch. Austen later admitted that it was intended as a joke, and that he was disappointed that readers had not understood that
Wild and Wooly Press only released three (out of seven) issues before folding, and so the dilemma of how the series protagonists personal relationships and inherent corruption led to the team’s self-destruction remains a mystery. Despite the volume of criticism directed towards Austen, I didn’t find anything repulsive in the two issues that I recently purchased (#2 & 3). Readers of diverse fare such as classic issues of Heavy Metal, Penthouse Comix, Star*Reach or even current stuff from Fantagraphics (for instance) would not be put off by anything shown within the pages of Worldwatch.

Artists Tom Derenick and Norm Rapmund are terrific on this series. Their women are bold, beautiful and very sexy. The male characters are equally appealing, and for once, a featured gay character isn’t drawn like a milksop. Despite his in-story antics, Ramrod is illustrated in a truly classic heroic manner. Every character is easily differentiated from each other and I agree with other critics who’ve interpreted the various team members of Worldwatch as analogous to a blended JLA/Avengers. The pencilled art by Derenick is some of his best ever, and it was for this reason that I picked up these issues.
["Nekkid Bottoms, USA", a XXX back-up series set in a nudist colony and drawn in a recognizable Archie Comics style, is really quite funny.]
I don’t believe that either Austen or Derenick participated on this book solely to gratify dark personal desires or to traffic in sleaze. I am willing to bet, given the public outcry over Austen’s earlier mainstream work, and his occasionally poor reaction to his most vocal critics, that he may have tried to craft a series using some familiar tropes that stretched the limits of what could be done with sex within a traditional superhero setting, and what certain shifts in current mainstream titles that – let’s face it – mimic very similar premises, suggest about modern publishing mindsets.

We live in a world that has become increasingly crass, venal and ugly. There is no consensus on what is or should be considered appropriate for mainstream comic books. The Comics Code Authority has run its course! It is a world of grey areas and reality TV series that make celebrities out of complete idiots, rich debutantes and fringe people who are full of themselves.
War Woman, Sergeant Mercury, Doc Gulliver and the other team members seem uncomfortably familiar and readers were teased with some interesting questions about sexual identity, criminal behavior, egotism, arrogance and real world politics. How this series would have ended is anybody's guess, but if you can get past some “R” rated dialogue, intense depictions of sex (including a graphic depiction of an attempted rape of the series lead female character in the midst of a major battle) or if stuff like this titillates you, you might want to track down Worldwatch and give it a look. I'm not sure how Blogger would feel about the nudity depicted within the pages of this series, but you can find examples online with a simple search.
Posted by Chuck Wells at 4:23 PM

Me and my friends were very entertained by this book and were shocked that it ended so abruptly.We thought it was doing well because it seemed to sell out quickly.