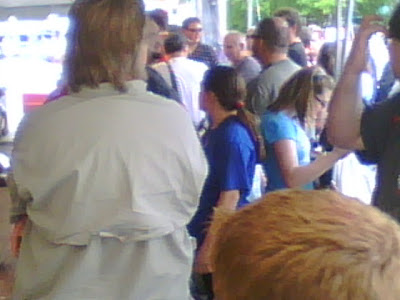 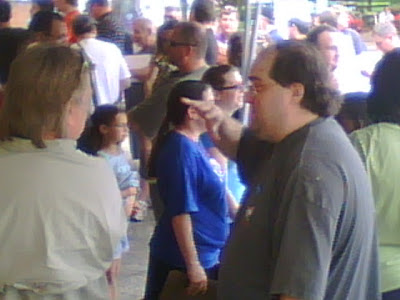 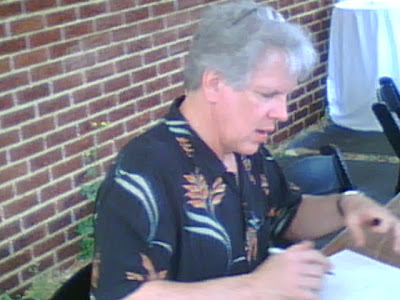 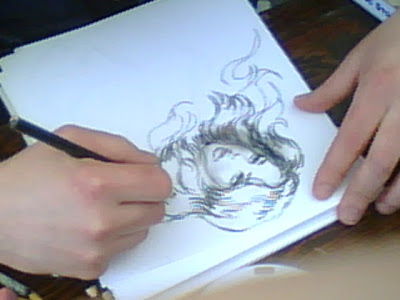 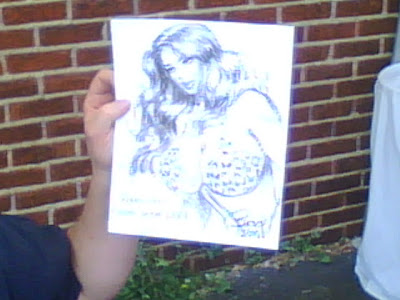 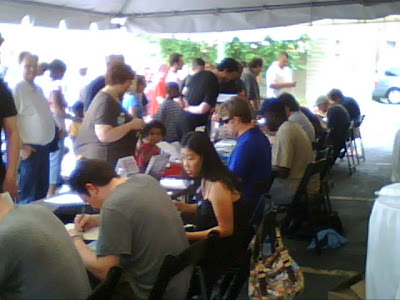 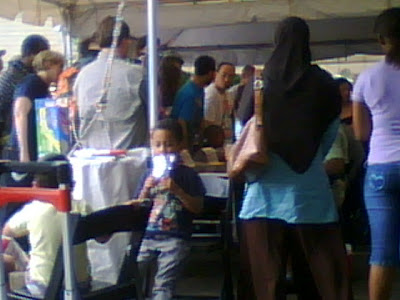 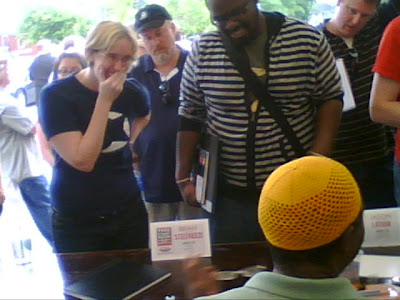 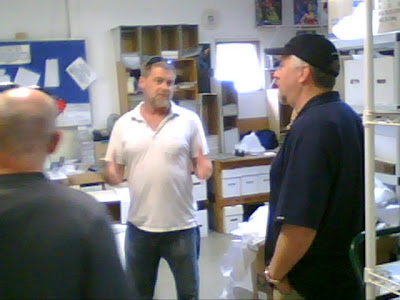 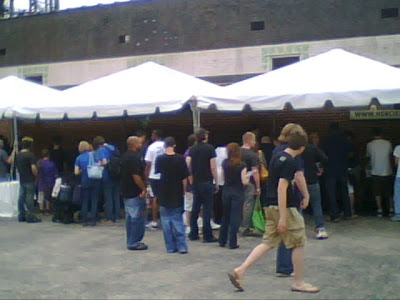 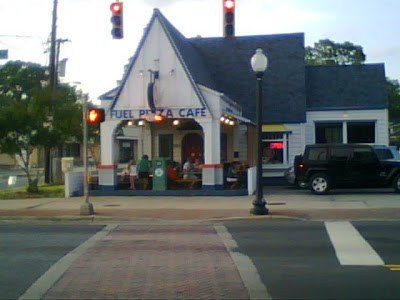 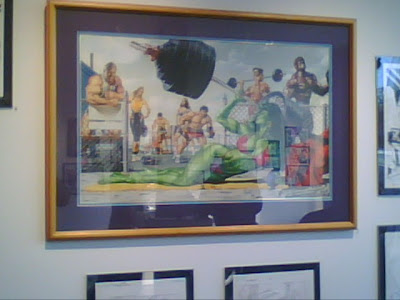 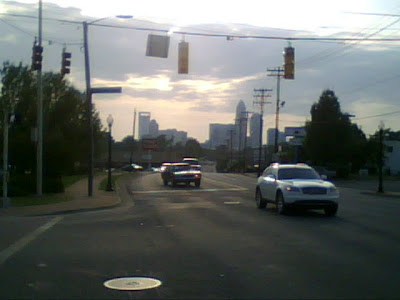 It's always pleasant to hang out with friends, both old and new, and talk all things comics for fun events like Free Comic Book Day.
Getting into Charlotte a couple of hours before Heroes Aren't Hard To Find opened allowed my brother David, and his son Jack and I to catch up with our friend, Burt Dellinger (who breezed in from Hickory, NC) over breakfast at Showmar's, located just across the street from the store.
After a round of coffee, bacon & eggs and biscuits, we ambled back over and settled in for a short wait while the Heroes staff set up the long tables of $1 comics under the big tents outside the main entrance. Another grouping of tables awaited around the corner under even more big tents. That was where the guest artists would be taking over the day, later on in the afternoon.
Once 10am hit, the doors were flung wide and the swelling mob was allowed into the store to search out the free comics in a fun egg hunt. Heroes places the freebies on the normal racks in their appropriate locations, so kiddie comics are in that section and mature books are in theirs, while the superhero titles are with similar books. This made for some fun, if occasionally frustrating searching, as I often had to back-track in order to locate something that I missed. Heroes allowed each customer a copy of every FCBD title that was available this year, a whopping thirty-three comics. One title, Love and Capes, went like hotcakes and that was the only one that I missed out on. Although I passed on a couple of freebies that I wasn't really interested in, I still walked out of the store with thirty free comics to read and enjoy. Discounted store stock also proved too good to pass on, and I grabbed a stack of back issues to complete holes in my personal collection.
After lunch at the nearby Jackalope Jack's for burgers, wraps, quesadillas and beer, we stepped around the corner to await the impending arrival of the guest artists. My brother David, brought his bound copy of last summers Wednesday Comics to have Brian Stelfreeze sketch the Demon on a blank interior page that was incorporated into the binding for that very purpose.
Stelfreeze, Jason Latour, Mark Brooks, Ian Flynn, Andy Smith, Nathan Edmondson, Budd Root, Tom Lyle and Sanford Greene were all on hand in Charlotte to offer free sketches for awaiting comics fans. Adam Hughes, Allison Sohn and Cully Hamner had to cancel at the last minute, although they have all been in attendance at previous FCBD events at Heroes. This has become an increasingly popular part of the Heroes FCBD event over the nine years that Shelton and the gang have been throwing these bashes. I was able to add a nifty sketch of Cavewoman by Budd Root to my collection without having to shell out for it. I can't commend the artists enough for taking the time to be at Heroes and for putting in several hours drawing for their adoring public, all for free, or in some cases for small donations towards deserving charities. Thanks guys, you're all tops in my book!
Making an awesome day even more special, Heroes owner/founder Shelton Drum invited us into the "Inner Sanctum" of Heroes Aren't Hard To Find (housed in a nearby warehouse) to view a massive estate collection that had recently been purchased. 43,000+ mostly pre-code comic books representing a wide variety of genres, and all grading in fine or better condition. It was a sight to behold, and that photo is blurry for a reason. You try holding your composure while standing among uncatalogued golden age and silver age comics that haven't even been offered for sale to the public. Intoxicating doesn't even begin to describe it!
Soon we staggered back to the store and I hit the $1 discount boxes for a final stack of super-spiffy comics to read someday, and then we headed back to the pub for another round of beers. That still left time for a stop by the best pizza joint in the world, Fuel Pizza Cafe for supper. Yummy!
Yet the day still wasn't over. This year Heroes partnered with Twenty Two, a premium art gallery and wine bar, just up the street to present the opening of "Super! The Fine Art of Comics", an exhibit of original comic book artwork, sketches, covers and drawings by current and former Heroes Convention guests, including some of the guys mentioned above, but also featuring work by Steve Ditko, Jack Kirby, Joe Jusko, Brandon Peterson, Adam Hughes, Steve Epting and many more. The exhibit will run until the start of next months Heroes Convention on June 4, 2010. You can even purchase some of these pieces for pick up after the exhibit closes (if you've got the cash).
All in all, it couldn't have been a better day and although the weather temporarily threatened to put the kibosh on the festivities, it held out and didn't spoil the day. We had so much fun in Charlotte, that I expect to be there each year hence. [Photo's; above, in descending order] Fans await the arrival of the artists, patience is a virtue when getting free sketches, Tom Lyle arrives early to start drawing for fans, Budd Root doing my own sketch of Cavewoman, and the blurry final sketch, behind the lines of artists alley, the crowd swells about 2pm, my brother David next in line for Stelfreeze (in his signature knit cap), Shelton Drum/D. Wells/B. Dellinger inside the Heroes warehouse, the end of the line for sketches at 5pm, Fuel Pizza Cafe, Joe Jusko's original She-Hulk painting at Twenty Two and the skyline of Charlotte from the gallery on Central Avenue at 7pm. Hope to see all of you there someday!
Posted by Chuck Wells at 4:27 PM