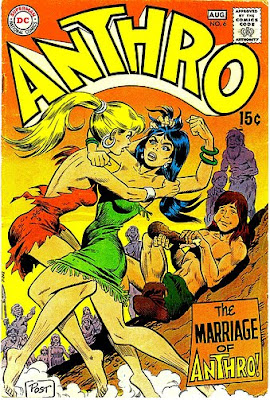 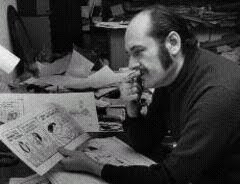 Howie Post died on Saturday, May 22, 2010 at the age of 83. His career ran from the golden age until at least the 1980's. Post wrote and drew tons of stories for Harvey Comics, where he was credited with creating Spooky and Little Hot Stuff; plus contributing to Richie Rich and Casper the Friendly Ghost.
Post was best known for his funny animal comics, on books like DC's More Fun Comics and Marvel's The Monkey and the Bear. He also worked in animation, for Famous Studios and he was the creative head of Paramount's cartoon studio in the early '60s. Howie's syndicated strip The Dropouts ran between 1968 and 1981. His other credits include Strawberry Shortcake, Madballs, Wally the Wizard and Heathcliff for Marvel's Star Comics line and one of my favorites, Anthro, a short-run comic book series that he wrote and drew in the late sixties.
Anthro was the first Cro-Magnon boy born into the Stone Age. His father, Neanderthal caveman Ne-Ahn was the chief of his tribe, his mother was a captive member of another tribe. Anthro took two competing cave girls as his wives, Embra and Nima, and began the human race, when Embra bore his first child.
The Catacombs extends its sincerest condolences to Mr. Post's family, friends and fans.
Posted by Chuck Wells at 4:44 PM

The ideal teenage dream: two beautiful women fighting over him!