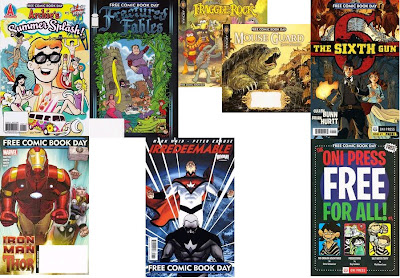 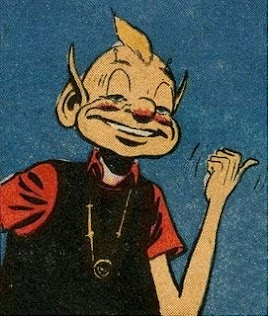 I finished reading through all of the free comic books that I picked up on "Free Comic Book Day" this past weekend and I have to admit that I enjoyed the diversity of product that was generously made available in 2010 by the publishers, creators, distributors and comic shop owners. Very well done and much appreciation to each and every one of you fine folks.
Thirty-three titles is alot of reading, and now that I've slogged through them all, I thought that I would offer my top ten list for this years stash. The following ten freebies were my favorites out of this years bunch (in no particular order): Archie Comics Summer Splash!#1(Archie Comics), Fractured Fables (Image Comics, ), Mouse Guard/Fraggle Rock (Archaia Studios Press), YOW! The John Stanley Library “Grab Bag” (Drawn & Quarterly), War of the Supermen #0 (DC Comics), Sonic the Hedgehog (Archie Comics), Bongo Comics Free-For-All (Bongo Comics), The Sixth Gun #1 (Oni Press), Love and Capes #13 (Maerkle Press) and DC Kids Mega Sampler (DC Comics).
All ten of these terrific comics were fun to read, entertaining as heck and pretty easy on the eyes for a general audience to appreciate. I also have to applaud those publishers who released more than one title for free comic book day, because that's a great way to show the love for your fans, while showcasing more than a single series.
Of course, ten books was only the tip of the iceberg that was actually available on the first weekend in May, so I would also like to single out a few "honorable mentions" which narrowly missed the cut for my top ten list: Iron Man/Thor (Marvel Comics, ), Irredeemable #1 (Boom! Studios), Oni Press Free-For-All (Oni press), The Stuff of Legend (Th3rd World Studios) and Weathercraft (Fantagraphics). These books were equally entertaining, highly eclectic and although they didn't make it all the way through the elimination round, let's just say they merely got axed after the initial swimsuit competition.
Many other books that were released on FCBD 2010 were okay, and I appreciated what they tried to do, but some publishers opted to issue titles that sampled several different series within the pages of a single comic and for me this just didn't work. I either liked a lone story out of a mixed volume or I was left confused by what the publisher was all about in the first place. "Artifacts" from Top Cow was so confusing that I didn't even try to finish reading it, and "Worlds of Aspen" hit me the same way. "The Green Hornet" from Dynamite would have been far better if it had focused on a single Hornet, instead of a couple of pages from several series about four different characters. None of the all-ages titles that I've failed to single out failed me as a reader (Shrek, Toy Story, Iron Man/Nova, Owly, etc.), I liked those books too, but as an older reader, it's unlikely that I would continue to follow those books on the stands based on the material offered, but I'm glad this stuff is out there.
Each of my top ten picks made me want to see more and for me, that's what Free Comic Book Day is all about. Since next year is the tenth anniversary of FCBD, I can't wait to see what they come up with in 2011. I mean, how can they top "33" awesome free comics??
Posted by Chuck Wells at 7:16 PM

you finished them but i never start the comic section.