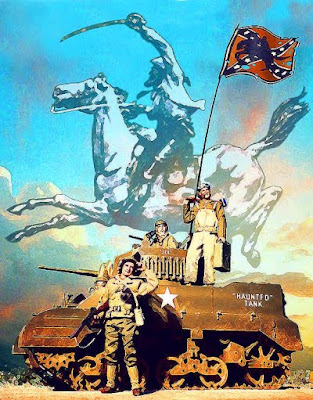 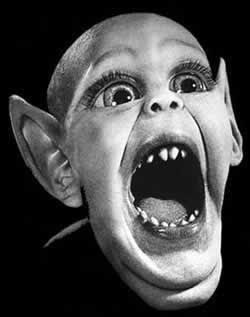 Memorial Day 2010 is fading fast, so let the Catacombs take a brief pause to remember the fallen. I've chosen this nice image of The Haunted Tank crew to represent our honored war dead.

*************************************************************************
The weather is atrocious and is apparently gonna be stubborn and remain that way most of the week. Hopefully, the sky will clear for the kick off of the three day Heroes Convention in Charlotte at the end of the week. I do know that come hell or high water, I will be there. The photo (left) is my tongue-in-cheek nod to how I feel at the moment. It's always a bit tense trying to prepare to go out of town to a convention, worrying if you're forgetting something to be signed or making a list (and checking it twice) of neat stuff to look for at the show.
This year I have prepaid for most of the sketches that I'm planning on picking up from the artists who will be in attendance. Don't ask me how much "scratch" I've already shelled out, just take another glimpse at that photo (above; left). Yeah! That sorta says it all.
****************************************************************************************************************
My oldest daughter is due to fly to London in a couple of weeks for a summer internship, before finishing off her last year in college. My youngest daughter is preparing to head for Charleston, SC, even as I flee town, this week too. She's going to watch a young man she's a bit sweet on, graduate from Marine Boot Camp and then she'll chill out with her friends at the beach for a week. At least my son isn't hitting me up for a wad of dough. He has two jobs to keep himself floating in high cotton, now if only they'll take good care of my pug, Bandit, while I'm hobnobbing with the 300 comic book industry guests - and the even larger horde of mega-nerds - who will probably be trying to snake me on some high grade bronze age gems in the Queen City of the Carolina's. Don't press me boys!!
As an advance notice to the lovely lasses who also happen to show up in force for Heroes Con, this year I am more or less single, for the first time in twenty-two years; so fair warning. I won't be turning down any indecent proposals, like I've tended to do in the past. This year, all bets are off (and hopefully a few wardrobes as well).
Yippee ki-ay!
Posted by Chuck Wells at 9:02 PM

Chuck: With regard to new single status and the new window of possiblities, I say God speed and may the Gods of vigor give you strength!

Remember that scene from The Matrix: Blue pill or Red pill...