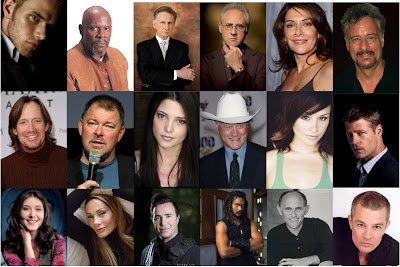 Dragon*Con, is the world's largest fantasy/SF convention, held annually in Atlanta, GA, on Labor Day weekend, September 3–6, 2010. That's means there are only 118 days left until the fun begins.
The organizers of Dragon*Con never rest on their laurels, since the Con offices stay open year round. As a courtesy, the Catacombs would like to entice you with this early sneak peek at some of the celebrities that are already queued up to appear at the show. I won't bore you with a long list of names, but if you are a fan of genre films and television shows, or classic TV of any kind, just take a gander at this montage of actors from recognized fare like Star Trek The Next Generation, Star Trek Deep Space Nine, Star Trek Voyager, Twilight, New Moon, Hercules The Legendary Journeys, Andromeda, Dallas, Halloween, V, Firefly/Serenity, Farscape, The Road Warrior, Stargate Atlantis, Buffy the Vampire Slayer and Angel, and that represents just the tip of the celebrity iceberg that will be descending on Atlanta at the tail end of the summer.
There will also be dozens and dozens of sci-fi, horror & thriller authors, comic book writers and artists, musicians & bands, cos-players, reenactors, and well; more stuff than you can shake a light-saber at during four fun-filled days in the heart of Dixie.
Click here for more info and plan to join the fine folks of Dragon*Con in September.
Posted by Chuck Wells at 8:03 PM