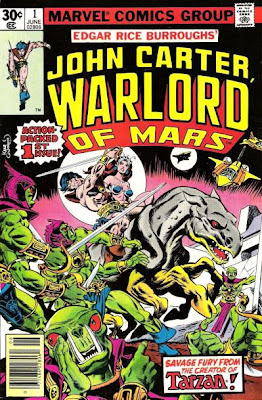 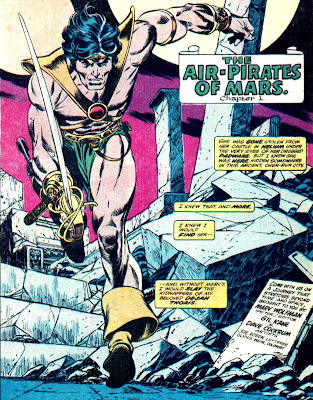 John Carter, Warlord of Mars is a Marvel Comics series created in 1977 by writer/editor Marv Wolfman and artists Gil Kane & Dave Cockrum , based on the Barsoom series by Edgar Rice Burroughs and featuring the eponymous title character, a Confederate soldier who is mysteriously transported to the red planet. The series ran for 28 issues from 1977 to 1979, and three annuals. It won the Favorite New title Eagle Award in 1978.

Gil Kane illustrated about ten issues before Rudy Nebres and Ernie Chan took over art chores. Chris Claremont replaced Wolfman as writer after fifteen issues.
The first issue alone is worth seeking out for the incredible blend of Kane & Cockrum (the same team that drew the classic 1970's debut cover of Giant-Size X-Men #1).
Posted by Chuck Wells at 11:21 AM

VERY affordable series to collect too! Good stuff and a great example of 1970's Marvel style.

Along with Warlord of Mars and the Tarzan of the Apes series, Marvel did right by these ERB characters.

DC Comics had recently lost the rights to produce ERB-related books, and the losing the Joe Kubert stuff was a big blow for fans, but Marvel definitely didn't drop the ball with John Buscema, Gil Kane on this very same stuff.