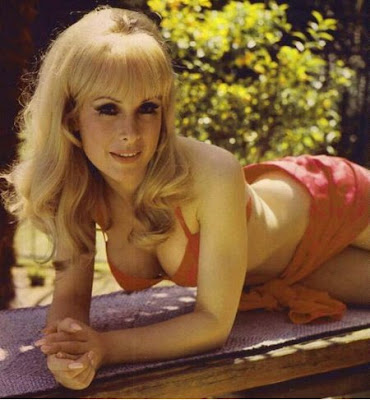 Yesterday, I caught a re-run of one of the latter episodes of I Dream of Jeannie starring Barbara Eden and was reminded of just how "hot" a chick Eden had been. As fun as the entire series was, and given the - at the time - controversial decision to cover up the actress belly-button (in her "skimpy" genie costume), I've always preferred the shows from the later seasons, because Barbara got to wear a more expanded wardrobe selection which showed off her awesome figure better (especially her terrific legs).
Eden starred in I Dream of Jeannie as Jeannie, a genie who was set free from her bottle by astronaut Major Anthony Nelson, played by Larry Hagman. Barbara was initially passed over for the role as she was blond and of small stature, but Sidney Sheldon called on her when he was unable to find a suitable brunette to play the part. I Dream of Jeannie was a ratings success and it ran from 1965 until 1970. During this time Eden was twice nominated for Golden Globe Awards. She reprised her Jeannie role in two made-for-TV reunion movies (I Dream of Jeannie: 15 Years Later in 1985 and I Still Dream of Jeannie in 1991), and also in the last scene of the fairly recent theatrical movie A Very Brady Sequel. In addition, she has played Jeannie in many TV commercials (AT&T, Lexus, Old Navy). I Dream of Jeannie has gone on to become one of the most successful series in international syndication earning Barbara Eden many fans over the world.
Barbara Eden also had featured roles in a few theatrical genre films like Voyage to the Bottom of the Sea, The Wonderful World of The Brothers Grimm and 7 Faces of Dr. Lao.
Posted by Chuck Wells at 7:21 AM

Her and Elizabeth Montgomery, two of the sexiest women on TV at that time.

Wow. Great picture. I remember when she had a guest role on "The Andy Griffith Show".