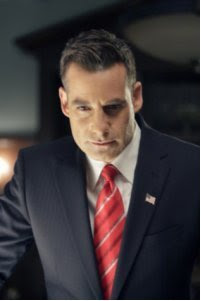 Everybody knows what the TV term "jumping the shark" means....right? This is the point in a TV show or movie series' history where the plot veers off into absurd story lines or out-of-the-ordinary characterizations. This usually corresponds to the point where a show with falling ratings apparently becomes more desperate to draw viewers in. In the process of undergoing these changes, the TV or movie series loses its original appeal. Shows that have "jumped the shark" are typically deemed to have passed their peak.
During the 1970's, the TV series, Happy Days had prominent character, Arthur Fonzarelli (aka the "Fonz") ACTUALLY jumping over a penned up shark, while the shows characters were vacationing in California. Of course, the Fonz was doing such a ridiculous thing in response to a dare, but alas, a catchphrase was coined, despite the lameness of the original episode that spawned it.
This season has seen more reversals, misbegotten scenarios, and extraneous characters than the previous two seasons combined. They might as well have named this series, The Many Deaths of Nathan Petrelli. And what pray tell, does Claire actually contribute to this storyline anyway? She is cute mind you, but the cheerleader whose salvation was supposed to have saved the world, really hasn't amounted to much of anything. I know the shows writers have long since forgotten this, but Claire's invincible blood would have revived her biological father just fine last night. Don't believe me? Just ask H.R.G.! He took a bullet right through his horned rim glasses, through his eyeball and into his brain last year, and a handy bit of invincible blood had him quickly hopping off the slab in the company morgue pronto. If you want to have Claire continue to hang around just for purposes of eye candy, and nothing else, then have her wear string bikinis and cutesy-pie lingerie. At least then I would understand.
I won't miss Nathan much, since his earlier actions had in effect turned him into more of a villain, than a hero. Too bad they didn't dispense with that idiotic Dr. Suresh at the same time and for the same reasons.
There was one really, really good moment during the finale and that occurred when Sylar had the tables turned on him by Peter Petrelli in the Presidential limo. It's moments like that that give me some entertainment as a viewer, but as the overall competency of this wayward series has continued to degrade, even stuff like this hasn't led me to expect much going into the summer break.
The NBC network executives are in all likelyhood, partially to blame for how badly this show has skewed. Creator Tim Kring obviously didn't have much of a road map to start with, and we have too many aborted plot lines, and too many randomly introduced and rapidly forgotten quest star characters to believe anything else anyway. The originally stated intention of having an evolving cast as the series moved on, was what went wrong here, boys. Sylar just ain't all that! The conceit of hanging onto Zachary Quinto, reminds me of the time when NBC held actor Pierce Brosnan to another year of the faltering series, Remington Steele, just because Brosnan had the inside track to become the next James Bond. Timothy Dalton got the gig instead, but Brosnan eventually got his turn anyway. And there's nothing like having the "new" Mr. Spock in the house, is there? Even when his character has overstayed his welcome.
Before season 4 begins filming, I would encourage somebody at the top of the executive food chain to demote Kring to a tertiary position, and let Bryan Fuller either assume full show runner status or simply let the man who helmed Pushing Daisies, hire his own all-new writing staff or have final say on scripts for next year.
Kudos for bring back Ali Larter, guys never waste a fine looker like her again. A bonus with her Tracy Strauss character is that she is more interesting than the earlier identify of Nikki-Jessica. Um, don't hesitate to put her in bikinis and lingerie, too.
I hope season 4 measures up upon its return - sooner rather than later - because unless it does, I don't think even a cool moment or two is gonna hold my interest further. While we're at it, the Sarah Connor Chronicles is getting axed over on Fox, so Summer Glau is probably going to be available and she has serious genre chops to offer, plus all blonds, all the time, is not the way to go. Trust me!
Posted by Chuck Wells at 2:04 PM