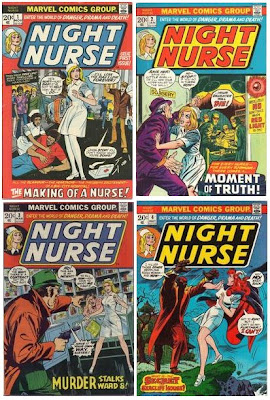 Marvel Comics Night Nurse lasted four issues in late 1972 and early 1973. The series was originally introduced as one of a trio of Marvel Comics aimed at a female audience, alongside Claws of the Cat and Shanna the She-Devil. Night Nurse straddled several different genres, and focused on the adventures of three female roommates who worked the night shift at the fictional Metropolitan General Hospital in New York City: Linda Carter, Georgia Jenkins, and Christine Palmer.
The series was written by Jean Thomas (then wife of comics writer & editor Roy Thomas) and drawn by Winslow Mortimer. Unlike most of Marvels offerings at the time, the stories contain no superheroes or fantastic elements. However, the night nurses do encounter a fair amount of "danger, drama and death", [as the cover proclaimed] as they work to foil bomb plots, mal-practicing surgeons, and mob-affiliated hitmen. Night Nurse, like other relevant-trend comics of the 1970s, attempted to address real-world social issues; Night Nurse #1 featured a scene where a character asking why his poor neighborhood is always the one experiencing power outages. "Why not Park Avenue for a change?"
Night Nurse #4 was the only issue of the series that took place away from Metro General (and New York City). This story shifted away from the urban drama of the first three issues and instead featured Christine embroiled in a suspenseful Gothic-style adventure, complete with a foreboding mansion, dusty secret passageways, and mysterious lights.
Night Nurse had an all-too brief run as a series, but due to low distribution of its published issues, the series fetches very high prices today and is considered scare.
Posted by Chuck Wells at 1:00 PM

No way... never heard of this before. This is just the kind of nutty 70's stuff I can never pass up when I see it in the bargain bins at con's!

Thanks for posting it!

Night Nurse is actually in the current comics, too, Spider-Man recently, but I think I saw her before, too.