Seduction of the Innocent and the Comics Code Authority (Part I) 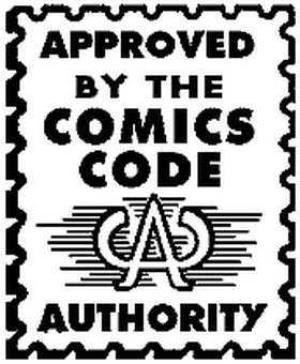 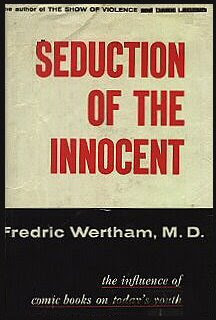 Billion dollar bailouts, CEO's feasting at the public teat, plunging confidence in the American government (and it's ego-tripping-everything-that I-do-or-say-IS-the-law politicians), faux-celebrities emerging from ridiculous "reality' television shows, teetering economies, diminishing civil liberties, wars and rumors of wars; It's the end of the world as we know it, folks!
Now what does any of that have to do with comic books? Maybe nothing, maybe everything. Sales continue to slide across the board for mainstream publishers, even as comic book properties themselves become an increasingly large part of media entertainment of all types. Inhouse, marketing has trumped characterization, and forget continuity - no fan can pick up a single title that contains their favorite hero, because the "big two" (that's Marvel & DC), have spread their heroes across so many multiple series; that it's just too damn difficult to fathom, much less keep up with (us old-schoolers didn't have this kind of trouble keeping up with multiple Earths way back when) and besides, the dueling company's are just going to reboot everything all over again when the season changes. Why worry? It's just comic books. Right?
Well, there was a time when the people of America were snookered into thinking that simple little "funny books" were going to lead to the rapid collapse of Western Civilization, so maybe we should take a sobering look back at the McCarthy Era; those nostalgic days of the Cold War and the lynching of that era's designated fall guy, otherwise known as EC Comics.
The Comics Code Authority was created in 1954 as part of the CMAA (Comics Magazine Association of America) in response to public concern over what was deemed inappropriate material in many comic books. This included graphic depictions of violence and gore in crime and horror comics, as well as the sexual innuendo of what aficionados refer to as "good girl" art. Dr. Fredric Wertham's book Seduction of the Innocent rallied opposition to this type of material in comics, arguing that it was harmful to the children who made up a large segment of the comic book audience. The Senate Subcommittee on Juvenile Delinquency hearings in 1954, which focused specifically on comic books, had many publishers concerned about enforced government regulation, prompting them to form their own self-regulatory body instead.
The CCA code was based upon the largely unenforced code drafted by the Association of Comics Magazine Publishers in 1948, which in turn was modeled loosely after the 1930 Hollywood Production Code (the Hays Code). However, the CCA imposed many more restrictions than its like-minded predecessor.
Like the previous code, the CCA prohibited the presentation of "policemen, judges, government officials, and respected institutions ... in such a way as to create disrespect for established authority." But it added the requirements that "in every instance good shall triumph over evil" and discouraged "instances of law enforcement officers dying as a result of a criminal's activities." Specific restrictions were placed on the portrayal of kidnapping and concealed weapons.
Depictions of "excessive violence" were forbidden, as were "lurid, unsavory, gruesome illustrations." Vampires, werewolves, ghouls and zombies could not be portrayed. In addition, comics could not use the words "horror" or "terror" in their titles. The use of the word "crime" was subject to numerous restrictions.
Where the previous code had condemned the publication of "sexy, wanton comics," the CCA was much more precise: depictions of "sex perversion", "sexual abnormalities", and "illicit sex relations" as well as seduction, rape, sadism, and masochism were specifically forbidden. In words echoing the Hollywood Production Code, love stories were enjoined to emphasize the "sanctity of marriage" and those portraying scenes of passion were advised to avoid stimulating "lower and baser emotions."
Advertisements for liquor, tobacco, knives, fireworks, nude pin-ups, postcards, and "toiletry products of questionable nature" were all prohibited.
Tomorrow, we will take a look at specific parts of the Code and see just how far we've come since the 1950's. See you then!
Posted by Chuck Wells at 7:49 PM

I look forward to reading your whole look at the comics Code Authority and Dr. Wertham. Always an interesting subject and really, something a lot of newer fans don't get the full impact of on the comics industry.