Retro-View: Adventure Into Fear with The Man-Thing #17 (Marvel Comics) 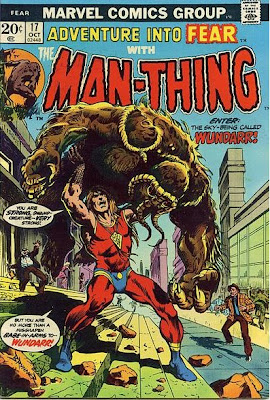 Marvel Comics Adventure Into Fear #17 (October 1973) was written by Steve Gerber and illustrated by Val Mayerik & Sal Trapani. "It Came Out of the Sky!" begins with an obvious and intentional homage to the numero uno character from Marvel's "Distinguished Competition" - Superman. The mindless, muck-monster from Citrusville, Florida (otherwise known as the Man-Thing) inadvertently stumbles upon a silver rocket ship, and after battering, shaking and finally, simply smashing the wayward missile into a nearby tree - what emerges is the superbly muscled, auburn-haired figure of a young man.

At this point, unlike the Man-Thing himself, the readers are treated to a nifty back-story which reveals that twenty-four years earlier on the planet Dakkam, [mirroring the golden age origin of the legendary Man of Steel] an astronomer called Hektu desperately tried to warn the leaders of his world that their planet was doomed due to the imminent supernova of the planets sun. Failing to convince them, and under the penalty of imprisonment, Hektu and his wife Soja toil for six Earth months, to construct a spacecraft to transport them to safety on another world. At the last moment, the authorities dispatch police forces to stop their efforts, in order to prevent an unnecessary panic. Hektu and Soja are both killed, but not before Soja places their infant son, called Wundarr, into the spaceship and activates the launch of the craft.

Arriving on Earth in July 1951, the rocket ship is espied by an old couple as it crashes into the nearby swamp [again, mirroring the golden age Superman's Ma & Pa Kent], however the two opt to ignore the "flying saucer"; since it could be Martians or communists. I kid you not! The infant trapped inside then spends the next two dozen years "growing up" within the confined womb of the vessel, innocently thinking that this is all that the world amounts to; that is until the Man-Thing shatters his illusions. Spotting the shambling beast, but without the verbal skills to address it, Wundarr leaps with joy - thinking that the brute is his "mother" and surprisingly discovers that he has phenomenal powers granted to him on Earth that he would not have on his native Dakkam.

Wundarr's leap carries him several miles away, where he comes plunging down, destroying a large construction crane in the process. Subsequently driven away by the gunshots (which don't actually harm him) of the construction crew, Wundarr uses his nascent x-ray vision to spot the Man-Thing who is still fumbling around back at the original crash site several miles away. After a brief tussle with an alligator, Wundarr - still not in command of his great strength - manages to return to the site of his "birth" and engages the Man-Thing in all-out brawl which spills over to the nearby hamlet of Citrusville.

The obligatory battle effectively culminates in a draw between the two relative innocents, and as the muck-monster finally loses interest and shambles away, Wundarr realizes that his beseeching pleas to his “mother” have fallen on deaf ears, so he flies away to seek comfort elsewhere.

Gerber turns in a very fun story and an interesting homage to Superman, the artwork is pretty cool, too. Even the coloring by George Roussos is excellent, and it should be mentioned that Wundarr’s costume makes use of the same color scheme as DC’s Man of Tomorrow (although the colors are inverted on this issues cover). The issues cover art is provided by Frank Brunner.
Posted by Chuck Wells at 3:15 PM

I've just come across your post and was wondering if you knew how much a copy of the comic would be. Can you help?

Copies are currently available on eBay, generally in FN condition, for less than $10.

Exercise a degree of patience while looking around and you will probably find a NM copy for about the same.