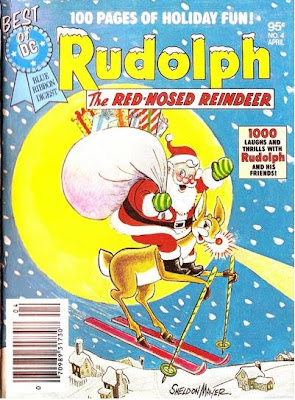 The twelve days of Christmas continues in the Catacombs with this seasonal 1980's Flashback. Best of DC #4 (aka Blue Ribbon Digest; Mar-Apr. 1980) is a full Sheldon Mayer extravaganza, although Mayer is aided by Tenny Henson on inks & Joe Orlando edited this fun-filled holiday issue.
Rudolph the Red-Nosed Reindeer had been a staple of DC's tabloid-sized Limited Collectors' Edition series, with an impressive five individual volumes. That was more than Superman, Shazam, The Justice League of America and Tarzan in that format, but with that high issue count Rudolph did manage a tie with The Batman. Rudy also starred in his own twelve issue series for DC back in the 1950's, plus he had at least one annual released in 1962.
This issue is special in that although much of it reprints earlier Limited Collector's Edition material, two stories, "Will a Stitch in Time Save Christmas?" and "The Secret of the Lucky Dragon Egg" were originally intended for publication in the Limited Collectors' Edition tabloid format, but never made it to the stands due to the infamous 1978 company-wide cancellation known as the DC Implosion.
Posted by Chuck Wells at 7:58 AM

Chuck: Next year, I must find one of these editions. Sheldon Mayer! Thanks so much for the tip! -- Mykal

Best of DC #4 is the hardest book in the series to get in a NM/MT condition or graded by CGC in a 9.4 and above. Really...any digest you'll find 9.4 or above is extremely rare.

These DC digests has nothing but issues with printing defects. And at the time nobody thought these were collectibles, so allot of them weren't handle properly or storage properly.

These books were bought as something to read when going to school or work.

Allot of these were sold in the market places along with Readers' Digests. Everyone look as these as children books.

The DC digests are the toughest series in the 1980's to get in a truly near mint condition.