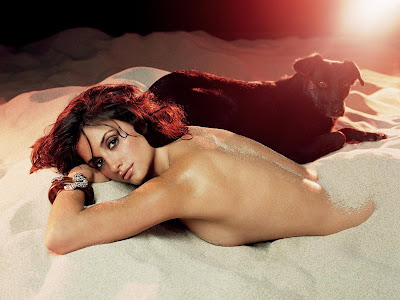 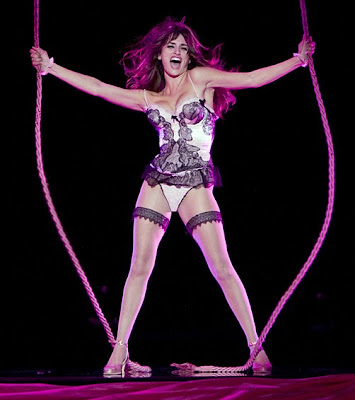 Spanish actor Penelope Cruz is truly one of God's gifts to humanity. At the tender age of 35, she has already racked up an impressive string of award-winning (or nominated roles) in foreign language films like Jamón, Jamón, La Niña de tus ojos, Belle époque, Don't Move, Broken Embraces, Volver and All About My Mother. American films that have earned her additional acclaim include Blow, Vanilla Sky, Vicky Cristina Barcelona (Best Supporting Oscar), Captain Corelli's Mandolin, Gothika, Bandidas, Sahara and the recent CGI-animated film, G-Force (voice only).
I spotted this sexy photo of Cruz (from the upcoming musical film, Nine; left) on MSN this morning and immediately displaced my planned selection in favor of this ravishing Latina. With the recent life-change that has left me happily single, I've embarked on a blond quest, but I've just gotta tell you kind folks that the only other femmes on the planet that could easily dissuade me from acquiring a hot blond companion are Latin lovelies like Ms. Cruz. Now if only I can convince her that I'm a better option for her than Javier Bardem.
Posted by Chuck Wells at 9:30 AM

In the November 2009 Vanity Fair, cover-featuring the gorgeous Penélope, there is a quote by Woody Allen: "I don't like to look at Penélope directly. It's too overwhelming."

But if Bardem the boyfriend is too scary (I saw No Country For Old Men) and you're looking for a blonde, there's always her Vicky Cristina Barcelona co-star, Scarlett Johansson!

Penélope may be a Latin bombshell, but you dropped a bomb yourself down in the body of your copy, "...recent life-change...happily single..." Holy cow, Chuck. Incoming! That news is kind of explosive. Hope things are otherwise OK with you.

My twenty-two year marriage went bust, Pappy, but it had been leaning that way for some time.

Honestly, it took me the longest to realize that it was actually over beyond repair, and my "ex" is currently in the midst of some truly bizarre adjustments that leaves me protecting my personal karma by staying the hell away from her as much as possible. Our three kids are adults more or less, so no damage there, and yes, I am pretty darn happy to ahve survived the tumult.

Sadly, Ms. Johansson is spoken for. Ryan Reynolds got there first.