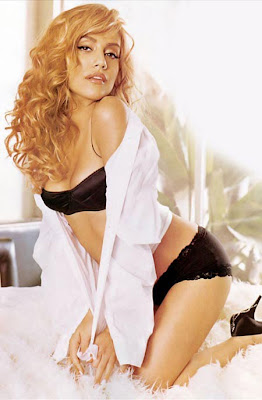 Actor Brittany Murphy passed away due to cardiac arrest yesterday at the age of 32, and folks that's just way too damn young. She made a name for herself in popular films and on television from the tender age of fourteen, but some of her lifestyle choices also made her an easy mark for comedians. Considering her unfortunate death this weekend, it's really sad to read that just within the last few weeks, her supposed addiction to drugs was again parodied on Saturday Night Live.
Despite being raised in New Jersey and California, Brittany Murphy was a true Georgia peach having originally been born in Atlanta, Georgia in 1977. I wanted to say farewell to this lovely lass for her fine (but brief) performance in Sin City and her voice work on the animated series, King of the Hill, but since Christmas falls this week, I didn't want a downer-style post for this weeks "Gal" Friday; so many condolences go out to her family, friends and fans. She will be missed!
Posted by Chuck Wells at 8:48 AM

Chuck: Her voice work as Loraine on King of the Hill was absolutely brilliant, sexy and very smart. Her death is such a tragedy. Nice tribute, Chuck! -- Mykal