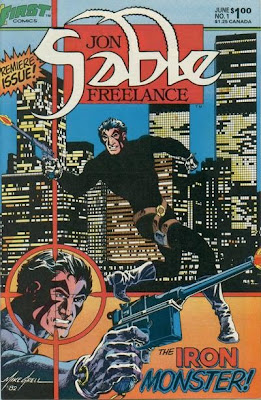 Jon Sable Freelance was created, written and drawn by Mike Grell for fledgling publisher First Comics, beginning in 1983. Jonathan Sable was a bounty hunter and mercenary who had previously competed as an athlete in the 1972 Munich Olympic Games. After witnessing the terrorist outrages at those games, he married a fellow athlete and they relocated to Rhodesia, where Sable became an organizer of safaris for tourists, and later a game warden. It was during this time that his family was murdered by poachers. After avenging his slain family, Sable returned to the USA and became a free-lance mercenary.
Sable also maintained a double identity as a successful children's book author under the name of "B.B. Flemm." Unlike many such characters, his literary agent was aware of his other identity's activities, but was most persuasive in enforcing his writing contract obligations as well. The character was heavily influenced by Ian Fleming's James Bond novels as well as drawing on pulp fiction crime stories. Jon Sable Freelance lasted 56 issues from June 1983 to February 1988 before being cancelled. While Grell wrote and drew all of the covers, he stopped drawing the interior stories after #44. After the title's cancellation (and Firsts ceasing operations), the character made occasional cameo appearances in some of Grell's other titles over the years.
Posted by Chuck Wells at 9:38 AM