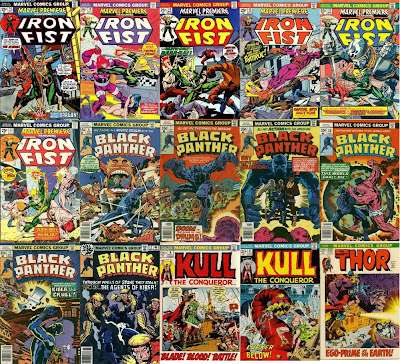 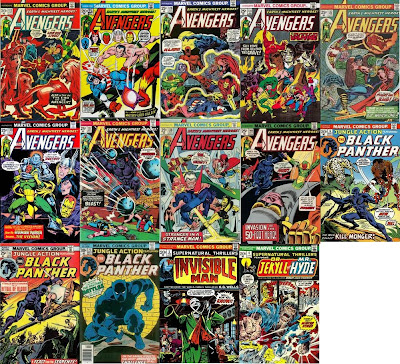 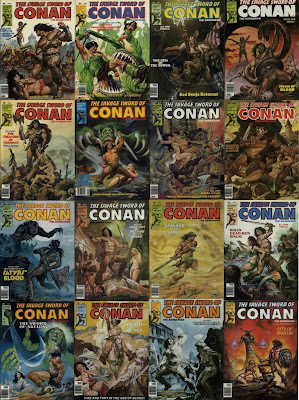 Yesterday I attended one of those regional one-day comics shows that are basically bread & butter events between the bigger conventions. This one was held literally within walking distance from my home, and boy did I benefit from having spare change to spend.
A dealer whom I've seen at this venue any number of times, had greatly upgraded his usual wares, but not his usual low prices. I happily procured almost fifty classic bronze age Marvels that grade between VF+ and NM (mostly NM); and not only that, the pages in these beauties are almost pristine white, with only a couple of them having a very slight degree of tanning. The cover gloss on them is superb too, and handling defects that are evident are truly minimal.
I am pleased to say the least.
The Savage Sword of Conan the Barbarian issues that I've opted to show represent a portion of what I picked up. I got these issues for $2 apiece! White pages, glossy covers, beautiful stories that are anchored by Big John Buscema, folks you just can't beat that. For the record, the issue numbers above are 41, 42, 45-52 and 54-59. {*} As you can see, I've gone back back and added cover captures for the other bronze age Marvel issues that I picked up along with the black & white 1970's magazines. I grabbed VF-NM issues of The Avengers, The Black Panther, Marvel Premiere, Jungle Action, supernatural Thrillers, Thor and Kull the Conqueror.
Sigh!
Plus, I reacquired an issue that I had originally bought off the stands and then parted with many years ago, Marvel Movie Premiere #1 (and the only published issue) which featured an adaptation of the film, The Land That Time Forgot.
Posted by Chuck Wells at 8:49 AM

Chuck, thanks again for participating in our joint jungle girls week. I got a kick out of your Gal Friday Danielle Gamba fitting into the theme in her leopard skin miniskirt.

Congrats on scoring the Marvel black and white magazines. I enjoyed them and still have a big stack of the Conan issues. My personal favorites are any of the John Buscema-penciled/Alfredo Alcala-inked issues.

Wow! Good deal on all those Conans...those are beautiful looking Savage Swords, not even the reprinted versions can be gotten that cheap! It's always fun to pick up something you had long ago and haven't seen for ages!