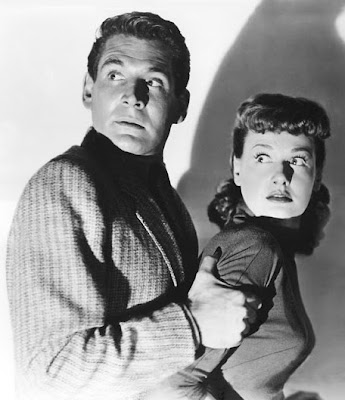 Known for his suave manner, Gene Barry was featured on numerous television series during a career that spanned more than fifty years. In 1955 he was featured in a recurring role during the final season of Our Miss Brooks and then went on to star in three of his own popular TV series -- Bat Masterson (his most famous role), The Name of the Game, and Burke's Law. He won a 1965 Golden Globe for Burke's Law. That series, featuring homicide investigations by a millionaire police captain, surprisingly returned in 1993-94, with Barry once again appearing in the title role.
He also starred in the classic 1953 science-fiction film War of the Worlds, directed by George Pal and made a cameo appearance in Steven Spielberg's 2005 version of War of the Worlds, along with his original 1953 co-star Ann Robinson (both are pictured; right). Other television series that he appeared in include Suspense, Science Fiction Theatre, Alfred Hitchcock Presents, Charlie's Angels, Fantasy Island, The Love Boat, The Twilight Zone and Murder: She Wrote. Barry was cast as the killer on the original Columbo TV pilot, Prescription: Murder.
Gene Barry passed away on December 9, 2009, at the age of 90. Condolences go out to his family, friends and many fans.
Posted by Chuck Wells at 8:58 AM

Watching Burke's Law as a kid in the sixties, I felt somehow that Barry was the epitome of a sophisticated, uniquely American man - always at ease yet vaguely intimidating. A man that was always ready to dominate if called upon. Looking back and seeing all that has come after him, I see that I was perfectly right. May he rest in peace. -- Mykal

I've always thought that it was really funny that Barry initially had zero interest in playing any western TV character, but he ultimately changed his mind when shown Bat Masterson's traditional derby hat and cane. It was that touch of sophistication that won him over to what became an iconic role. He reprised the Masterson role twice decades later on television alongside Hugh O'Brien as Wyatt Earp, at least one of those appearances was on a Kenny Rogers Gambler telefilm.