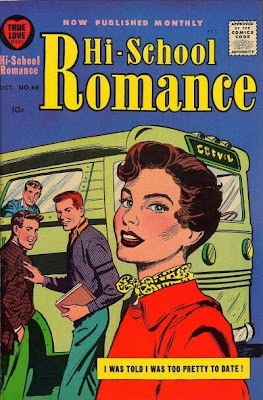 Harvey Comics released a wide variety of material during their long publishing career. Today's Retro-View focuses on Hi-School Romance #68, which was originally published in October 1957. This comic is chock full of extras such as ads for free photos of your favorite movie stars, flashing simulated diamond rings at fabulous savings, there are pages devoted to developing fuller calves, shapely thighs, hips and ankles, instructions on how to quickly & safely remove blackheads, the requisite text story and a snippet about strange romantic customs.
The first of the four featured interior stories, "Odd Girl Out" is illustrated by Al Avison & Warren Kremer (this tale was originally titled "3 on an Island" and the splash page was redrawn from the original story page). Avison artwork is used again on "My Sister's Husband", where the original art shows some Comics Code-mandated story and dialogue changes. John Sink provides art chores on "My Answer!", and artist Tom Hickey's "Not Good Enough - for me!" also has Comics Code-mandated story and dialogue changes.
Of course Warren Kremer went on to his greatest fame on Harvey's line of all-ages comics material including Casper the Friendly Ghost, Spooky the Tuff Little Ghost, Wendy the Good Little Witch and Richie Rich, among many others.
The artwork on this issue is really not bad at all and if you've never had any interest in this type of material, you are missing out on some great entertainment by giving these classic romance comics a pass. Books like this populated the stands for at least a couple of decades, and most of them featured artists who became widely acclaimed for adventure material. I'm talking about greats like Jack Kirby, Joe Simon, John Romita, Nick Cardy and many more.
In this issue, Al Avison's lead story somewhat threw me at the outset, when I initially thought that the splash page was drawn by Milt Caniff, but learning the truth didn't detract from my enjoyment of this story about Enid, the school's champion swimmer (who has always liked Brad), but he is going steady with Sally. During a school outing on a boat, a freak accident leaves the threesome stranded on an island. After Sally sprains her ankle, Enid takes charge, providing food and shelter for the trio until handsome Steve Bruckner arrives in his river patrol boat to rescue them. As they board the rescue boat, Brad professes his love for Sally, however Enid isn't left out in the cold, as she turns her eyes to the strong and heroic Steve (who appears to be equally excited to be with her).
You won't find any new stuff like this on the specialty comics store racks ever again, and that's too bad, but follow my example and occasionally troll the offerings on eBay. You might find an affordable issue now and again. I picked this one up for two bucks, and it sure beats the hell out of the fourteenth iteration of Wolverine or Superman's origin any day.
Posted by Chuck Wells at 8:05 AM