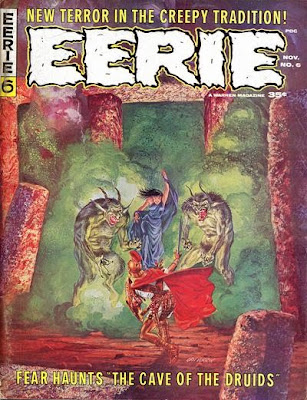 Eerie #6 was originally released by Warren Publishing in November 1966 and this fine early issue continued to offer "New Terror in the Creepy Tradition"!" The cover is by the great Gray Morrow.
This issue almost succeeds in being entirely written by Archie Goodwin. Goodwin scripted six out of the seven stories contained within, and he was aided by some of the best illustrators that Warren had to offer.
In "Cave of the Druids" by Archie Goodwin & Reed Crandall, Roman Legionnaire, Marcus Severus is drawn into danger by the siren call of a sultry druidess, and narrowly avoids sacrificial death by turning the tables on her by his own strength of will.
After such a terrific start, we are treated to a tale by Goodwin & Steve Ditko, in which jeweller Lester Darrow finds himself accosted on the street by a seedy bag-man who wants to unload a fabulous gem, but Darrow quickly discovers that a price must be paid by anyone who stares too long into the "Deep Ruby".
Next up is "Running Scared" by Goodwin & Sam Citron (who is billed as “Mark Ricton”) in one of those buried alive derivatives that are so common in the horror genre.
Goodwin & Angelo Torres gets things back on track nicely when an unfortunate officer of the British Crown unleashes "The Curse of Kali"; which details a surprising twist on vampirism by tales end.
"Trial by Fire" is the lone story not written by Goodwin and although credited as "Jay Taycee", the full duties are provided by EC Comics veteran, Johnny Craig. Judge Alfred Harker seems to suddenly cast spells against his will, and his wife knows more about these manifestations than she is letting on, but which of the two will pay for this sin?
As this issue winds to its inevitable conclusion, readers are presented a neat riff on Frankenstein, "Point of View" by Goodwin & Rocco Mastroserio and your host, Uncle Eerie closes out Eerie #6 with "The Changeling" by Goodwin & Gene Colan. Rachel Meredith is having trouble getting used to the people at her new job as Governess for Donald Hazeltine, but she is really unhappy when she finally meets young Donald's real mother.
It's hard to beat these old Warren black & white mags for pure entertainment value, and there really isn't anything even close to what these books had to offer on the stands these days. My suggestion is to exercise a bit of patience and regularly troll eBay for affordable copies.
Posted by Chuck Wells at 9:17 AM

Dark Horse is reprinting this material in hardcover format, isn't it, Chuck?

Yes they are and in a nice format too, but nothing beats the originals.

My preference is always the comic books themselves, as published, and I tend not to buy packaged collections most of the time.

Archie Goodwin was a big EC comics fan before he went into comics himself. I think he one time homemade published a fanzine, mostly about the early MAD Comics called HOOHAH!