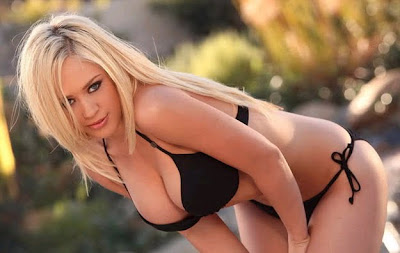 Those among you who occasionally venture into an adult cinema, or video rental store may recognize today's "Gal" Friday selection as rising XXX actress Kagney Linn Karter. The twenty-three year old Texan is really making a name for herself, having won such recognition as the 2010 XRCO Award for New Starlet, the 2010 XBIZ New Starlet of the Year Award and two 2010 AVN Awards for Best POV Sex Scene and another Best New Starlet nod.
"Kagney Linn" is apparently her real first & middle names, but she chose "Karter" as her fictional pseudonym as it "just fit perfectly". She was also chosen as the Penthouse Pet of the Month for June 2009, and appeared on the covers of Hustler in April 2009 and Adult Video News in June 2009.
In case you are curious, she was named by her father after Hollywood legend, James Cagney. I may not have seen any of her films, reportedly numbering sixty-nine, but I do know what looks good and she definitely tantalizes me into seeking out at least some of her .... work!
If you've got the cojones, I highly recommend a speedy Internet search for even "hotter" photos than the lovely shot (above) that I've respectfully posted. And don't say that I've never done you any favors!
Enjoy!
Posted by Chuck Wells at 4:46 PM

Maybe not Catwoman but Cattywoman?

erm, you'd better just watch the film for yourself.

So it is infinitely possible to discuss..