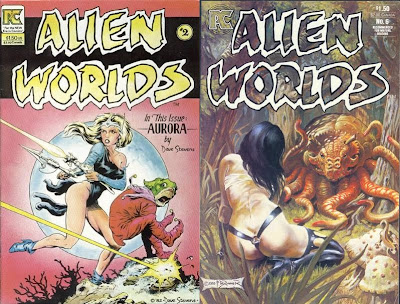 Alien Worlds was a bi-monthly science-fiction anthology series originally published by Pacific Comics between December 1982 and April 1984 (eight issues; which included an offshoot Three-Dimensional Alien Worlds special released in July 1984). Eclipse Comics & Blackthorne Publishing later continued the title for a total of fourteen issues through 1985.
The title was edited by Bruce Jones and April Campbell. Nearly all of the stories in Alien Worlds were written by Jones, with only a few exceptions. Jones had developed a talent for writing short genre tales with a twist ending, during his years with Warren Publishing on titles such as Creepy and Eerie. He was also influenced by horror and sci-fi movies of the 1950s, but Jones added copious amounts of graphic violence, sexuality and female nudity into the mix; several issues sported a “Recommended For Mature Readers” warning on the cover. However, for the most part Alien Worlds avoided the more intensely gruesome subject matter of Jones' other Pacific comic, Twisted Tales, which was published at the same time.
John Bolton, Dave Stevens, Frank Brunner, Joe Chiodo, Al Williamson, Richard Corben, Roy Krenkel, Val Mayerik, and Rand Holmes all contributed work on the series.
Trivia: April Campbell was the model for Pacific Comics character, Somerset Holmes.
Posted by Chuck Wells at 10:25 AM

I got 'em all, Chuck, and they are awesomely good!