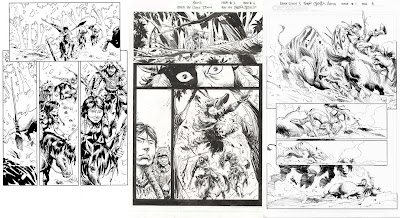 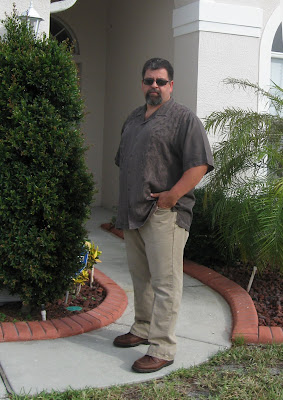 The Catacombs is pleased to present the final part of a dual interview with artist Sergio Cariello (pictured; right) and writer Chuck Dixon. Today we will discuss the second of two exciting new projects these seasoned pros are hoping to place with a publisher; “Akota: Wargod of the Lost”.

Q) Sergio, you’ve been both a student and an instructor at the Kubert School. Whose work do you look to for inspiration or which classic artists influenced your own work?

Q) Chuck Dixon says that you are an “upbeat” and “eager” guy who is willing to draw anything, and that trait is too rare these days? So, what motivates you as an artist?

Cariello: I get motivated by the story first. Then I imagine how a movie of that story should be done. I get excited, as I read it, by similar themes and characters and scenes I've seen before in movie of other art form that resembles what I've just read and my brain starts working and getting creative on how I want to portray/draw the comic. I try to gather enough reference. Either a book or/ Internet and even toys and miniature replicas or the real elements to help me do a good job on it.

Q) Give me some insight into your relationship with Chuck Dixon?

Cariello: Chuck is like an older brother to me. We enjoy talking about everything and going to conventions together. We can talk for hours. We have a lot in common. I learned a lot from him in this business and other matters. He's very smart and knowledgeable. As strong willed and self-confident as he is, he’s also fun and a gentleman. Always kind and courteous. Very pleasant to be around .I feel safe when I'm with him.

Q) Now, “Akota: Wargod of the Lost” looks like it could have been informed by something like the old Gold Key series, Turok Son of Stone. Is that a valid comparison?

Dixon: Akota is the story of the first peoples to cross the land bridge from Asia to North America. These are the people who would populate the continent as Native Americans. The growing cold of the second Ice Age forces mass migrations and genocidal tribal warfare among the people of Central Asia. Akota leads his tribe on a trek across the globe to new lands with strange animals and new challenges. It’s a kind of Neolithic Lord of the Rings, very violent barbaric action in a real historical setting that’s hardly touched on.

Q) On the sample pages that Sergio has drawn, there is a creature called an "entelodont". Is that an actual historical beast or only something made up?

Dixon: We made nothing up. Early man (as recently as ten thousand years ago) co-existed with wildlife that we can barely imagine. The entire Eco-scape was vastly different then and man was NOT at the top of the food chain. We’re working to present a world alien to anyone living today that was very real for mankind not that long ago.

Q) Tell me a little bit about how you see stuff like “Akota” and why a non-superhero book seems to be such a tough sell?

Cariello: I don't know why something I like doesn’t sell, but no one knows until one tries. Many books that sell - I wouldn't buy, so that's the way it is. Some like yellow, others like red. Italians love westerns. Brazilians and French love humor. Americans love super-heroes.

Q) Both of these “possible” series appeal to me far more than the latest spin-off, mega-crossover event, and each is reminiscent of types of comic books that typically don’t get served anymore, but that used to be well-represented on the stands. What is the difficulty of interesting potential publishers in fronting these kinds of non-superhero books today?

Dixon: Yeah. It would be easier to sell a mini-series about a superhero daycare center (anyone want to lay odds that’ll be in the next Diamond Previews?) than something different. But I’m not interested in chasing down the spiraling rat hole that is the crowded super folks market.

Q) If something that you’ve created doesn’t find an available outlet; do you set it aside for a rainy day, work to “hone” it until it becomes more palatable to the market or just toss it into the circular file?

Dixon: Never throw anything away! I get asked by agents all the time if I have anything that’s not optioned. Today, you can get someone from outside the comics market to fund the production of a comic with an eye toward TV and movies. So, you never know what might have legs.

Q) How and when to you produce your writing? Do you observe a standard workday model or simply write when the mood strikes you?

Dixon: I “write” all the time. No matter where I am. But actual time at the keyboard is less than an eight hour day. To me, it’s pages not hours. Seven to eight pages is a good day and I do that no matter how long (or short) it takes. Five pages if it’s Simpson's.

Q) Sergio, what fact about you would surprise people the most?

Cariello: I might enjoy fun and be perceived as a total easy going guy ... but I am deeper than I appear and have very strong convictions by which I live. At the same token, when you think you've figured me out I might just prove you wrong.

I thank each of you for stopping by the Catacombs and wish you the very best. Hopefully we will see “Geneva of the Jungle” and “Akota: Wargod of the Lost” in the comic shops to read and enjoy someday. Take care!
Posted by Chuck Wells at 4:43 PM

It's a bit disingenuous of Cariello to tuck away Joe Kubert's name near the end of his influences list -- the Akota material reproduced here looks like the work of a Kubert Klone (albeit a very good).