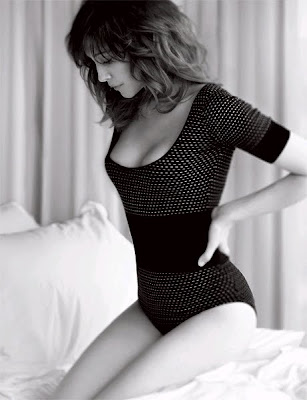 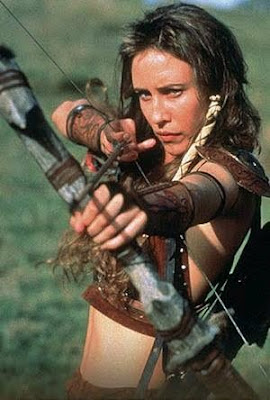 This weeks "Gal" Friday selection changed - twice - sometimes that just happens, when I follow my muse. I won't say which ladies got "bumped". I'll just wait and feature them some other time. For now, let's appreciate a photo (above; top) that really just takes your breath away.
Vera Farmiga is best known for her roles in the films Running Scared, The Departed, Orphan and Up in the Air. She was nominated for Golden Globe, Screen Actors Guild, BAFTA and Academy Awards for her luscious turn opposite George Clooney in, Up in the Air.
Farmiga is the daughter of Ukrainian immigrants and she gets the nod here today thanks to her genre role on the 1997 television series, Roar, alongside the late Heath Ledger. "Roar" chronicled the extraordinary life of Conor (Ledger), a reluctant 20-year-old orphaned prince who was forced to rise above tragedy and lead his people to freedom. Conor led a band of ragtag allies that included Caitlin (Farmiga; see photo above left), a beautiful former slave. Their primary struggle was against Longinus, a supernatural creature whose true essence was that of a 400-year-old Roman centurion ready to do the bidding of the evil Queen Diana, an emissary of the Romans.
That simple, sexy black & white photo up top certainly makes me want to "roar".
Posted by Chuck Wells at 6:18 PM