Parts Unknown and Beyond! 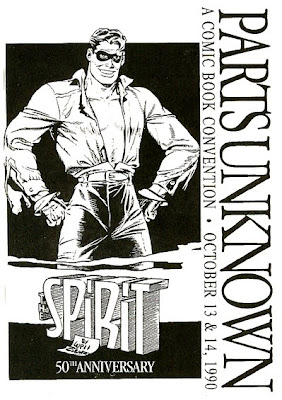 Al Williamson's recent passing got me to thinking about how fortunate I've been as a life-long comic book fan. It never ceases to amaze me how many industry professionals and veterans I've met during my life, literally hundreds of talented people, and all without having to go very far afield to see and meet them.
You see, I've been attending comic book conventions, both big and small, since I was in high school (back in the late 1970's). Although the larger conventions, with suitably greater guest options, etc., are hard to beat; sometimes the smaller venue weekend shows truly rise to the occasion.
In 1990, Parts Unknown: The Comic Book Store (located in Greensboro, NC), held a pretty awesome two day event on Saturday Oct. 13 & Sunday Oct. 14. The mini-con was hosted at their original location at the old Cotton Mill Square in Greensboro (the store has since moved to another location).
That weekend has always been one of my favorite comic book memories. So, what made that little show so special? Just take a look at the guest list: Will Eisner, Dave Stevens, Al Williamson, Mark Nelson, Joe Orlando, Mark Schultz, Angelo Torres, Murphy Anderson, Archie Goodwin, Bo & Scott Hampton, Richard Case and Marie Severin. Um, yeah - "Wow"!
To put this in a better perspective, the late Dave Stevens had to take a break from the shooting set of the feature film version of his creator-owned independent comic, "The Rocketeer", in order to attend. I'm glad that he did too, since that was the only time that I ever had a chance to see Mr. Stevens in person. As you can see, Parts Unknown had also pulled together an impressive list of former EC Comics veterans, including Williamson, Orlando, Torres and Severin. Each of them had gone on to enjoy long careers elsewhere, but it was a no-brainer to have them all together again. Of course, the late Will Eisner was the creator of the timeless detective, The Spirit, and he was also recognized as one of the masters of the comic art form, and Murphy Anderson was one of the artistic rocks that DC Comics built its entire Silver Age universe around.
I lived in Charlotte, NC at the time and had vastly underestimated the drive time to get to the show - on the last day of that event. With barely three hours to spare, I managed to drag my wife and two very small children along on a terribly overcast day to make that con, but I've gotta tell you, walking into the cavernous upstairs hall where the event was held was actually fairly magical. I'm pretty sure that my jaw was hanging open as I walked in. Being such a "Johnny-Come-Lately" also had some unexpected and unique perks. I actually didn't have to wait in a single long line to see any of the guests and I enjoyed quite a bit of conversation time with each of them.
The program book (pictured, above left) became one of my favorite mementos, having autographs from most of the guests and even small sketches by Severin, Nelson, Goodwin and Stevens himself. I had Dave draw "Unk", the little sidekick to Aurora, a sci-fi gal from the old Pacific Comic, Alien Worlds. It saddens me to report that my own copy went missing in storage a few years ago and is now one for the ages, but a treasured memory nonetheless.
For the most part, I've happily been a loyalist to Shelton Drum's "Heroes Aren't Hard To Find" stores and his annual Heroes Convention. Shelton started introducing me to comic book folks like Bill Sienkiewicz, Mike Baron, Sam Grainger and fantasy painter Clyde Caldwell, while I was still a slightly snot-nosed (not really, but you know what I mean) nerd, with his first small mini-cons at Eastland Mall in Charlotte. So with this years Heroes Convention only slightly faded after a couple of weeks - bear with me while I tip my hat his way also.
Thanks to John Hitchcock of Parts Unknown, Shelton Drum and the staff of Heroes and the unknown (to me) organizers of Dragoncon in Atlanta for bringing the entire comic book and genre industries co close to home. It means a lot!
Posted by Chuck Wells at 6:15 PM