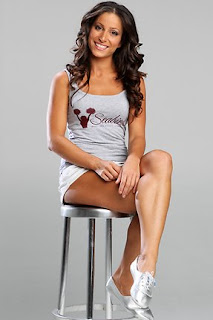 A former rugby cheerleader made history this week by becoming the first Australian woman accepted onto the world-famous Dallas Cowboys cheer squad.
Angela Nicotera of Sydney, survived an intense eight-week program to secure a spot in the final thirty-four cheerleaders of America's iconic NFL club. Around 540 women had tried out for the squad, which is affectionately known as America's Sweethearts (unlike the actual team itself).


The twenty-six year old Ms Nicotera, recently completed a bachelors degree in chiropractic science and she had previously been a cheerleader for the Manly Seabirds for nine seasons. Brains, beauty and a killer Aussie accent packed into the iconic, blue & white "Cowgirls" uniform; how could anyone have beaten that combo for this weeks official "gal" Friday selection?
I didn't think so either. Welcome ashore, Angela! 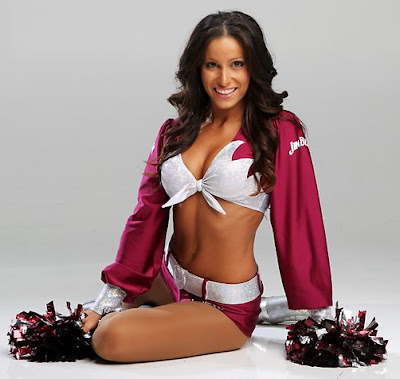 I got a couple of kinks that chiropractor is more than welcome to work out! (someone had to say it).

Is it just me or does this young lady somewhat resemble Shannon Elizabeth from the American Pie film series?

she certainly is a fox and smart to boot... hang on, I think foxes are considered smart anyway are they not?

Well, just so you know, her abilities as a plasterer are very poor. I ended up hiring someone else half way through the job. we had to tear down the whole section she had a go at and start anew